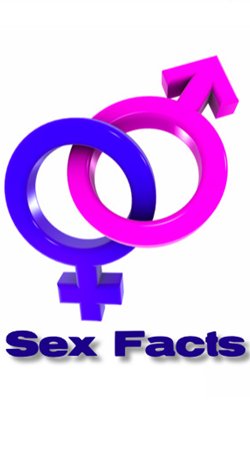 http://www.bestbirthcontrol.org
We all enjoy sex but it's always nice to hear the fun facts about it.
1. You can burn up to 200 calories during a 30 minute sex session and 26 calories just from kissing for a minute. You will never need to go to the gym again.

3. Kissing can prevent cavities. Due to all the extra saliva, it encourages lower levels of acid that build up on your teeth and cause decay as well as the saliva helps to remove any food from between your teeth. Also semen contains zinc and calcium which also help to prevent tooth decay.

4. The protein in sperm have a tightening effect on the skin. So when the sperm is left to dry, the evaporation of the water in it leaves behind a protein which can help reduce wrinkles. Although this may be an excellent form of a free anti-aging method, a major downside is that you have to walk around with sperm on your face.

5. In Asia before the 15th century, glans condoms (only covered the head of the penis) were used. In China these glans condoms were also made out of lamb intestines. In the 16th century, condoms were often made with linen sheaths soaked in a chemical solution and allowed to dry before use. Condoms were then fitted and held on with ribbon.

6. Sex is the best medicine. It causes the release of endorphins which cure headaches. So next time someone gives the excuse, "I have a headache," sex will actually make them go away. Also having sex can reduce a fever because of the sweat produced.

7. In Victorian times, women shaved their pubic hair in order to prevent lice. Because of this they would wear wigs called a merkin instead. These were also worn by prostitutes in order to cover up any sexually transmitted disease they had, such as syphilis.

8. On average it takes about 2 tablespoons of blood to get a man's penis erect.

9. Studies have proven that 85% of men who die of a heart attack during sex are found to be cheating on their wives.

10. The G-spot is a sensitive area located inside the vagina on the upper wall, an inch or two behind the back of the pubic bone. The G-spot is names for Dr. Ernest Grafenberg

12. A study was found that the better a woman’s genital self-image, the easier it is for her to orgasm

13. Most couples over the age of 65 still have sex at least once a week

15. The average time that a man lasts after penetration is two minutes

17. More women talk dirty during sex than men do

18. It is illegal to buy sex toys in Alabama

Other articles by chelly411