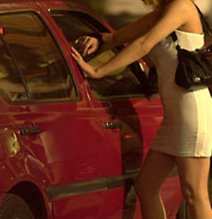 "I believe that sex is one of the most beautiful, natural, wholesome things that money can buy."

So the question of the month is should prostitution be legal in your country, and my simple answer is Yes. Yes, it should be. I honestly cannot think of a reason why it shouldn’t be legal. I really do feel that legalizing it in the states would make it a lot safer, bring down (some, not all, I am realistic) drug crimes, would provide jobs to those who need them (both as sex workers and those who provide support to sex workers) and could even stimulate the economy. Let’s face it, if the government legalized, regulated and taxed sex work, we would see an upturn in tax revenue that could possibly go towards pulling this country out of debt. “The prostitution trade in the United States is estimated to generate $14 billion a year”**. I know that the economy is a hot button topic but that’s why I mention it. What better way to bring attention to a subject than to make it more noticeable and just a lil' controversial?

Nevada is the only state in the US to legalize the practice of prostitution, and there are even some counties/cities have made it illegal including Las Vegas, you just have to get a sex worker from somewhere outside of city limits, like Pahrump.

So really to sum it all up for me, I do feel that it should be legal in my country, it should be regulated, and taxed and overall I feel that it would be a benefit not a detriment. I also feel that legalizing the practice would make it a lot safer for both sex workers and their clients.