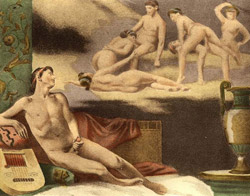 "Never get Freudian with a man with a pickle."

— Sam McCoy, as portrayed by Sam Waterston, from Law & Order

And regardless of how you may feel about the male half of our species, you have to give us at least this much: when it comes to all things jackoffery, wankery, or monkey-spunking, we’ve totally got it down. We might screw up everything else we touch; but no one – and I mean NO ONE – can beat us at our own game.

And I ain’t talkin’ ‘bout baseball, neither.

So let’s take a long hard (rim-shot!) look at all things wanking and even wankadelic, to give us a broader perspective of the subject besides that which dangles betwixt our legs.

The Chronicles of Jacking It

MONKEYS DO IT
And we share a lot of DNA with monkeys. This tells us three things:

2. If monkeys have been doing it, it’s been getting done since before humans were scrabbling about this big ol’ blue ball o’ earth. In fact, it’s probably only a matter of time before some anthropologist discovers a fossilized monkey frozen in eternal jackoffery (ostensibly because he was too busy spanking his, er, little monkey while a nearby volcano went all kablooey – and for the record, if you should happen to see a pyroclastic flow rumbling your way, my advice is to put your tallywacker away and RUN)


IT’S CRAZY TIME, REVISITED
By the 19th century, anti-masturbatory techniques and contraptions were all the rage. With special emphasis on ‘rage’, we can safely assume. These grim gimcracks included, but were not limited to:

- The Leather Jacket-Corset: this was a corset fashioned from leather and steel for the ‘benefit’ of boys. These benefits consisted of a metal penis-prison and "a steel band riveted to the shield permanently and attached to the body with an encircling steel band in such a manner that it cannot be removed and prevented access to the testicles." Yes; I know exactly what you’re thinking – I want one too.

- Spiked Cock Rings: just in case you thought you were going to get away with those unconscious erections and nocturnal emissions while you slept, forget about it – one wet dream and your penis was reduced to cube-steak.

- The Cage: yet another metal penis-prison. Strangely enough, the Cage has made a stunning comeback in recent years in the arena of CBT (cock and ball torture). But I don’t think the Victorian-era recipients were quite as thrilled with it.


20th CENTURY OUT-FOXING: SODA-JERKING IT
The gobbledygooked doctrines of Victorian anti-wankery persisted with little resistance until Albert Kinsey released the first of his Kinsey Reports in 1948(Sexual Behavior in the Human Male). Kinsey hit upon a novel idea: it feels good, so what’s the big deal? And across the Atlantic, the post-Victorian British began calling each other wankers. Whether this is related is up for you the reader to decide.

Masturbatory Myths: Cock-and-Bull Stories for the Young and Old

YOU’LL GO BLIND!
Only if you stare directly into the sun while jacking it.

IT GIVES YOU HAIRY PALMS!
Coating your palms in super-glue and then petting your cat Fluffy Muffy will give you hairy palms. But it ain’t gonna grow there, no matter how much you jack it.

IT MAKES YOUR BALLS SHRINK LIKE JUJUBES!
No, no, and no. Stop worry about ball-shrinkage; you’ll be worrying about droopage soon enough. And pass the jujubes.

IT MAKES YOUR HAIR FALL OUT!
At the time of this writing, I your humble sex-scribe servant, have been on this earth for 36 years. And for most of those 36 years, I’ve been on an Atkins-like diet of steady 3-times-a-day jackoffery. And the proverbial money shot: I have a ponytail three-quarters of the way down to my ass.

IT MAKES YOU ALL GAY AND STUFF!
If by ‘gay’ you mean ‘full of vigor and vitality, and happy to be alive’, then you are absolutely correct! Now keep jackin’ it!

And somewhere, between the cracks of all these newfangled masturbations lies the original brand, the one-and-only, irony-free delight of just shuttering your blinds, taking a deep breath, pulling it out, and jacking away.

So don’t settle for any of the substitutes. Because at the end of the day, you just gotta do what you gotta do. And what you’ve got to do is a damned fine thing indeed.