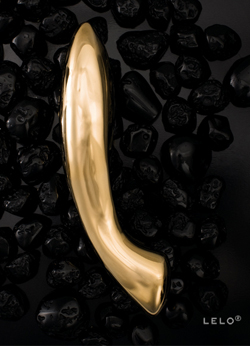 Are designer sex toys the new designer stilettos?
There’s an episode of Sex and the City called “A Woman’s Right to Shoes” in which Carrie Bradshaw has a pair of $450 Manolo Blahniks stolen at a friend’s baby shower. When the friend won’t reimburse her, she informs her that she’s decided to marry herself, and has registered for one thing – the stolen shoes. The whole point of the episode is that when you marry and have babies, you’re allowed to register for all the things you want, but nobody’s going to shower you with material goods for staying single and childless. You have to treat yourself, and those little indulgences can be very important, even if they seem frivolous to others.

The other day, flopped over in a post-orgasmic bliss, I realized I had used almost $500 in sex toys to get myself off. If you’re curious, I used the Liberator Wedge ($85), the NJoy Eleven ($300), and the Lelo Nea ($90). Factor in the $20 shipping for the Liberator, and you’re at $495 in booty – for my booty! For the record, I really don’t have some high maintenance vagina that requires $500 worth of toys to have an orgasm. For many years I made do with a simple $10 silver bullet vibrator, and that was good enough for me. Was my $500 orgasm 50 times better than the $10 one? No, but it was probably ten times better!

This brings up the eternal debate: are the expensive toys really worth more? The answer in my case is both yes and no.

But you always have to consider what exactly it is you’re paying for. I don’t really need a toy with five vibration patterns that I’ll never use. On the other hand, the $165 Minna Ola convinced me that programming my own vibration patterns could be a lot of fun. It’s cool that I can use my Jimmyjane Form 4 underwater, but a bit pointless when you consider that it’s not compatible with silicone lubes, which are the only lubes I’ve found that stay wet underwater! And as much as I love my little Nea, her big sister Siri left me cold. I felt like I’d wasted $100 on a gorgeous toy that would never give me an orgasm. Many of the fancy boxes and instruction manuals feel like clutter to me, and I almost never use the storage pouches either. How am I supposed to tell apart my toys if they’re all in little black satin pouches? So, expensive toys can definitely be hit or miss.

My friend recently joked about an engagement ring serving to “put a dollar value on pussy,” as if one were purchasing exclusive rights (in theory) to their betrothed’s vagina with a very expensive piece of jewelry. I’m not planning on getting engaged any time soon, but in the mean time, maybe I’m using my expensive sex toys to validate my priceless, single-lady vagina! I may not have a big, shiny rock on my finger, but I do have a couple of boxes filled to the brim with big, shiny sex toys, and that’s good enough for me!
Tags:
Views: 2670
Related articles

biancajames
I'm a blogger and sex positive educator and activist in Chicago!

Check out my blog for more toy reviews and ramblings on sexuality: http://www.romanscandal.com

Enter TZZ at checkout for 15% off your order!