How Don Draper Sells Us a Bum Rap On Love 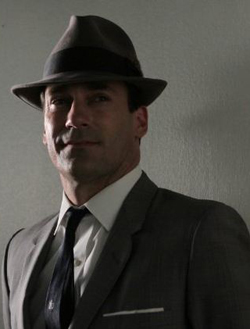 Don Draper is a role model for millions of American men – but is that why we’ve become increasingly unhappy in love?
In case you missed the TV adverts, the radio spots, the magazine articles, the billboards, the website banners and the girls with the show’s name emblazoned on the butt of their sweatpants (I might have made that last one up) you’ll probably be aware that Mad Men is back on TV.

And Mad Men is a brilliant show to bring up when it comes to discussing the concept of “expressions of love.”

Because the lead character – the suave and charming Don Draper – is a man totally unable to give an adequate expression of love. That’s why his marriage to the frosty Betty fractured, and why he leaves a trail of broken women behind him like wilted rose petals. There’s no little irony to the concept of a man who makes his living selling people on what they (think they) want, when he clearly has no idea himself.

There’s equal irony in the fact that most modern men don’t view Don Draper through the same cynical spectacles as I do. Instead of looking at him as a deeply broken man, unable to express his true feelings, he’s hailed as an archetypal male hero – a return to the “man’s man” that many think modern society is missing.

And he’s not alone. Just look at the similarly masculine icons he stands beside – fictional characters like James Bond, and real ones like John F. Kennedy. All are hailed as role models for men; yet each is as equally broken as the other when it comes to their relationships with women.
That’s perhaps why we live in such a broken age.

Today, the divorce rate is higher than ever. More than half of kids will see their parents’ marriage dissolve. Half of them will also see at least one of their parents’ following marriages end as well. While conservative Christians and right wing bigots go on about how same-sex marriage will “destroy the institution” of matrimony, it should seem pretty obvious to most of us that it got knocked to the ground a long time before the LGBT community got near it.

If you really want to know who I think’s to blame, you need to look a lot closer to home than matrimonially-minded gays and lesbians. The real culprit is staring us right back in the face when we look in the mirror every morning.

We Americans are trained, from an early age, to sabotage our relationships – and it’s something we’ve become increasingly adept at over the decades.

It all begins when we’re little; when boys and girls get introduced to what turn out to be totally incompatible romantic archetypes.

As boys, we’re given the Don Draper model – which roughly states that a man’s value in society is graded by his ability to attract women, and his ability to consummate that attraction and then move onto the next conquest. “Love ‘em and leave ‘em” is the motto.

By contrast, little girls are sold on the Cinderella model, which states that every little girl has a Prince Charming out there waiting for her; one who’ll sweep her off her feet, settle for none other and lead her off into the sunset to live “happily ever after.”

As you can guess, “love ‘em and leave ‘em” and “happily ever after” are not exactly compatible concepts. I honestly believe that it’s this disconnect which explains why so many of us wind up in doomed relationships. Men aspire to be Don Draper, while women expect them to be Prince Charming, neither realizing that such aspirations spell doom to any hope of romantic happiness.

And yet, there’s another factor also at work – and ironically, more blame that can be laid firmly at Don Draper’s doorstep.

As a society, in addition to being taught a self-destructive romantic model, ad-men like Don Draper sell us some deeply disturbing things about what we should expect from a relationship once we’re in one.

As Americans, we’re raised to be consumers. We consume big screen TVs, and juicy 8 oz. hamburgers, and soda and cigarettes and lite beer. Men like Don Draper pull all-nighters coming up with devious ways to convince us that the one thing that will make us happy in our lives – the one thing that will complete us – is whatever the hell they’ve been hired to sell that week.

And as a result, 99% of us spend our lives aspiring not to what we think will make us happy, but to what society says will make us happy. We’re expected to want the American dream – the house, the car, the widescreen TV – and our romantic aspirations are no less manufactured.

We’ve been sold this model so effectively, and for so long, that it’s become as ingrained in the American identity as the white picket fence. Society pressures us to get married too quickly, to pop out kids before we’re ready to, and then sign it all away in a divorce hearing just when things finally start to come together.

And when it comes to “expressing love” none of us have any idea how to do it beyond what the advertising has taught us – expensive flowers, costly dinners, pricey jewelry and anything else that has a dollar value attached.

Expressing your love used to be about the intangible things – chivalry, loyalty, compassion, passion, devotion and trust. Today, it’s the signature at the bottom of a Tiffany’s receipt. And none of us – absolutely none – are ultimately happy as a result.

Yes, that’s right. We want YOU to write something for SexIs! See this post for details!
Tags:
Views: 1317
Related articles