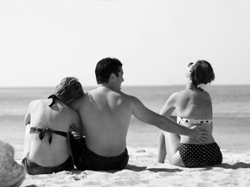 Whether you're the one excited about trying poly or the partner who's been approached to open up the relationship, you don't have to just guess and hope about the outcome of this venture. There are things to think about, scenarios to talk about, and tools to use to figure out whether your monogamous relationship has a good chance of withstanding the switch to polyamory.
I don't know why we don't talk about these things more often and more openly, so let's get started!

There are all kinds of types who get interested in exploring polyamory, but the same few hurdles keep catching folks who give it a try. Armed with a few specifics, you have a better chance of successfully navigating your way past them into polyamory — or figuring out early on that it's not for you and your partner, which will minimize any possible harm.

Ask Yourself: Why Do I Want This?
If your reason for wanting to try poly runs along the lines of "I can understand how I could love more than one person at a time" or "It would be interesting to watch my partner fuck someone else or hear about it afterward," you have a reasonable likelihood of moving toward poly.

If, however, your reason is something like "My partner wants to give it a try and I don't see why not," "Sex without strings attached could be cool," or "I love the idea of fucking whoever I want," you may not be as likely to succeed as you think. Polyamory, unlike open relationships or swinging, is not about freewheeling sex. Your relationships will often depend on how your other relationships feel about them.

Going poly because it doesn't seem like a big deal is a recipe for disaster — it is a big deal. Think of your mono or poly orientation as similar to your sexual orientation: you can experiment with it, but going against your historical orientation just because your partner wants it is unlikely to turn out well. You might feel traitorous to yourself afterward or unfairly manipulated, neither of which are good for you or your relationship.

Ask Your Partner: Why Do You Want This?
Here's a common scenario: You read something about poly and you realize you're interested. You read more, think about it for a few days, and decide you want to try it. You might even poke around a few dating sites, or start fantasizing about acquaintances you'd like to date on the side. You approach your partner with the great idea that you open up your relationship, and when your partner doesn't immediately respond favorably, you feel trapped by your jealous, controlling partner.

Meanwhile, from the other side, it feels like this: You feel that your relationship is going pretty well. Suddenly, your partner blurts out that they want to date other people — while still being with you, of course. You sit quietly for a moment, trying to figure out whether this means your relationship is slowly falling apart, or whether you've somehow failed to be everything your partner needs sexually and emotionally. Your partner asks you why you're so possessive and controlling while you're still just trying to figure out what the hell happened to bring this on and whether it's good or bad. See how it all goes wrong?

It's important to do your best to introduce your partner to polyamory the same way you did — as an abstract concept, not something they have to decide on by Friday night. If, given time and thought, they sound favorable to the idea, your work isn't over. That's the time to ask why they want to do it. Polyamory to placate one partner doesn't work, which should come as no surprise; doing anything solely to placate one partner usually results in peace for a limited time followed by a great big blowout, and that's the last thing you want.

Common Mistakes
There are a multitude of tricky areas polyamory can lead you into that are rarely discussed. I say it's about time to change that! Here are a few things you'll want to think about in advance and watch out for.

Jealousy. If this is not a problem for you, you aren't out of the woods. Polyamory means you have at least two other people's potential jealousies to take into account, and considering that jealousy can pop its head up after months or years, you can never completely write this one off your list of concerns. There's no way to prevent jealousy, really, but you can deal with it properly. If you're the one feeling jealous, speak up about it as soon as possible — and with an understanding that the partner who's sparked your jealousy probably hasn't done it on purpose. If you're the one being told you're creating jealousy, try to think of the situation as the instigator, not you personally. These are things that have to be worked out as levelly and evenhandedly as possible if polyamory is going to keep working.

Mixing polyamory and monogamy. Sometimes, when one partner is interested in polyamory and the other is not, this solution comes to mind: Partner A will be polyamorous, and Partner B will be monogamous to Partner A, and everyone will be happy. I am here to tell you that this works only once in a blue moon. It's usually one of those limited-time peace offerings by one party or the other (or both) that's extraordinarily likely to backfire on you.

Mixing priority levels. Most often, polyamory ends up existing in a hierarchy: You might have one primary partner — if you're coming to poly from monogamy, that's usually your previously monogamous partner — and then a secondary partner, and maybe a third (tertiary) partner. You might also have more casual relationships that all exist on a "first come, first served" basis. While this isn't how all poly is structured, it's the most common way. Mixing happens when, for example, Partner A is your primary partner...but you're Partner A's secondary partner. This is a particular problem if you're in a situation where your primary partner is your only partner at the moment — so they're your sole go-to person, but you're second on their list. It should be obvious how easily that can go awry, at least when you read it — it's a lot harder to deal with it when it's happening to you!

Don't Give Up...Until It's Time
I'm not trying to scare you off polyamory. It's the best thing that's ever happened to me, and I couldn't imagine my life any other way. I have been the "I could be monogamous, or poly, whatever" person, and I've been the secondary partner to someone who was my primary (although, ahem, that didn't last). If you both really want to be poly, you can work it out. If one (or both!) of you are only kind of into it, though, better that you know as soon as possible and call it off rather than end up in a very messy situation. Life is full of enough of those!
Tags:
Views: 2223