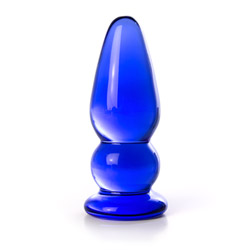 A Royal Fail As A Plug

This toy is a beautiful cobalt blue and made of pyrex. Pyrex is a strong, easy to clean, body safe, & smooth glass. It's easy to insert and use, and even comes with a nifty red velvet bag (a sheet of bubble wrap protects it inside the bag too) for safe-keeping. But as an actual plug, it did not want to stay in my body. So yes it's safe to use anally, like a sort of short dildo, because it has a base, but if you want to use it as a plug, it may not have the staying power you seek.
Pros:
-Gorgeous cobalt blue
-A good sized anal toy, feels great
-Easy to clean & store
Cons:
-Wont stay in; not enough space between toy & base
-Included storage case is thin
Rating by reviewer:
3
No votes for this review
Upon taking this out of the large box of toys I bought from EdenFantasys (as part of a sales promotion), and unwrapping it from its red velvet bag and bubble wrap, I started to doubt some of the reviews I had read of it being "teeny tiny & semi-dangerous." First off, this plug is gorgeous. It's cobalt blue, my favorite color, and I so enjoyed photographing it in the warm Autumn sunshine. It has a nice bag, albeit thin, and also comes encased in the aforementioned bubble wrap, both of which I will use together to keep it stored in to keep it safe.

It is smaller than expected (though I had read some reviews that warned me of this), at 3 1/2 inches, most of that insertable, but that's not necessarily a bad thing. I found that it was very similar in girth and size to my silicone Tantus Ryder butt plug, so I knew right-off that it would be pleasurable to use.

Being that this is made from borosilicate glass, aka pyrex glass, it is entirely body safe. It is boilable, sterilizable, and easy to clean. When stored it wont attract much dust or lint like silicone does, and it can be washed easily with anti-bacterial soap and water.

As another note, this can become very slippery when it is wet (either from lubricant or water). You may easily drop it if not being careful. For example, I have one of those vintage cast iron farmhouse sinks in my kitchen (which is known for breaking dishes) and I was terrified of dropping it in the "killer sink" and having it break. Especially with the noted fact that it can be very slippery, and I had anti-bacterial soap all over my hands as I was cleaning this. Luckily, I was careful and nothing of the sort happened. I may not be 100% with the use of this as a butt plug, but I still dont want my brand new toy to get broken. It would still be devastating. I hate dropping things and them getting broken.
Experience
Note: I had some issues (as usual) uploading any of the beautiful photos I took to my review here on EdenFantasys. However, they are up on my Facebook page which is Sugarfina Sex Toy Reviews. If you're interested, feel free to like my page there and also follow the link to my blog!
This content is the opinion of the submitting contributor and is not endorsed by EdenFantasys.com

My Royal intruder tags
About author