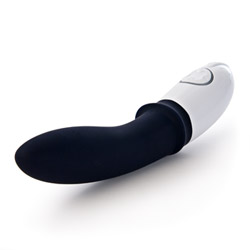 I've used my Billy several times since it arrived a few days ago, and I'm just as excited about it as I was when I first took it out of the box. It is the most comfortable of any non-glass toy I've used, thanks to the smooth, slick silicone coating and gently curved shape, and the vibration patterns vary from standard pulses to a novel wave. The rechargeable battery means it's always ready for play, and I can get several sessions in on a single charge.
Pros:
Excellent quality
Rechargeable battery
Vibration patterns
Cons:
Not for thrusting play
Rating by reviewer:
5
extremely useful review

For those with a prostate and a desire to pamper it, a Billy may be all you need to draw those powerful p-spot orgasms out. The distinct but gentle curve of the toy felt like it was made just for me, and easily hit my prostate the first time I used it. The hardest part of using it was choosing the vibration pattern and intensity.

Newcomers and experienced players alike will find something they like in this toy.

The insertable part of the Billy is totally smooth, before any lube is applied - not at all what I was expecting given the texture of my Rude Boy massager. Adding lube made it all the more smooth and slick, and incredibly easy to insert. The silicone is just a coating, though; I suspect there is hard plastic underneath it, because there is no squeeze to this toy...it is as firm as it is rigid (completely). The handle is plastic as well, and it's incredibly difficult to avoid getting lube on (so far, I've not managed to find a way to avoid this). Obviously, this leads to some challenges if you're unprepared to wipe this part of the toy down after insertion. It's no fun to stop just when the fun is starting, but an unsure grip can be even less fun!

The only thing that Billy isn't is a thrusting toy...regardless, it has ample reach, and the choices of vibration patterns and power settings lets it do the job it was made for perfectly. My only complaint is the design of the controls...try as I did, I just could not change speed or vibration pattern without looking. The control pad is just too small, and would be much easier to operate if it were two sets of buttons instead. However, I've found that there's one vibration pattern (out of five) in particular I really enjoy - a wave is the only way I can describe it, and I like the power cranked up to the max (there are seven power levels), so using it is pretty much set-it-and-bang-it for me. Others wanting more variety during play are going to need to practice manipulating the controls. That the Billy sports a rechargeable battery is the icing on the cake, though for the price I'd expect a feature like this. I would estimate I've used Billy for a total of 90 minutes now, on only the initial charge, with the power cranked up to the max every time. It feels like it's still going strong, and I'm sure I could get at least another 90 minutes from it before needing to recharge; I'll include this in my follow-up review.

Unlike my other massager and toys, this one is not waterproof and you can't throw it in the dishwasher to clean or sterilize...but cleanup is still super easy. Just wash the silicone part with hot water and your choice of cleanser, using a washcloth or similar. For the occasional deeper cleaning, just dip the silicone part of the toy in a 10% bleach solution.

You do need to take care not to get the plastic base wet...while the recharging socket has a rubber cover, it's maybe splash-resistant at best...for such an expensive toy, I wouldn't be trying my luck.

Lelo's packaging of the Billy is incredible - both discreet and very elegant. They clearly put as much thought towards the presentation as they did the design and manufacturing. The Billy comes in an attractive box, sealed in an inner plastic and cardboard package - a standard velvet storage bag is included as well. Until we get a second ToiBocks for my new and growing prostate toy collection, I'll be using the box that my Billy came in to store some of them.

For those that need it, an extensive multi-lingual user guide is included, covering topics of usage, care/cleaning, and warranty information.

When I'm in the mood to fiddle with my prostate, I typically reach for a smooth, rigid toy...occasionally my Rude Boy massager, but more often then not I'll grab one of the glass toys that my wife and I share. Now that I have a Billy, I have the best of both worlds...smooth, rigid, and vibrating! The day it arrived, I didn't have it in my hands for even a hour before I winked at my wife and slid in to the office with the Billy and a bottle of lube...she would keep the kids entertained while I gave my new toy its first run. I quickly de-pantsed and settled in to the recliner, slathering the toy up with lube. After teasing my asshole with a lubed finger, I began pressing the Billy against my hole with a slight swirling motion. After a minute, I want it inside me, and give it a gentle inward push. It slips in easily, and I fumble around for the controls...after a few seconds I manage to get the power button pressed, and keep pressing until it's maxed out. I keep pushing the toy in to me until it's buried to the ridge, then feel around for the vibration pattern buttons. I settle for the wave-like vibration at first, and continue pushing the toy against my asshole. With each pulse of the wave I push harder, and I could feel the tip hit my swollen prostate. My cock was rock hard by this point, oozing with pre-cum, so with my unoccupied hand I began jerking off while the other was pressing the toy against my ass as hard as I could, the tip vibrating continuously against my prostate. After a few minutes, I could feel the unmistakable twinges of an orgasm approaching, prompting me to stroke my dick even faster. I push the Billy hard against me once more and my body erupts in a 30 second long orgasm.

A few hours later, after our kids are in bed, I do it all over again laying in bed with my wife...she loves to watch me get off, and loves seeing things in my ass. We're both very glad I opted to get this toy while it was on sale. I wasn't looking for a non-glass, non-thrusting type of toy right at that moment, but the sale price evoked a very visceral "I want that" reaction, so we added it along with my order for an Icicles #13.
This content is the opinion of the submitting contributor and is not endorsed by EdenFantasys.com

Reviewed by Eliyahu (Eden Reviewer) You want to put that where? In me? Well alright!
Rank
5.2
wrote 2 reviews
This review was edited by
Comments
Make a post
Forum
Thank you for viewing Billy 2 – vibrating prostate massager review page!
Top