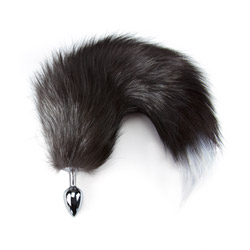 She picked the wrong bag

If you have been wanting to experiment with anal in a playful way this is a good choice. You don't have to worry about what type of lube to use, and you can pretend to be a cat;) This plug scared my wife at first, but she ended up loving it. She laughs just thinking about that night.
Pros:
inexpensive, small, cute
Cons:
The flare between the tail and the plug could be bigger.
Rating by reviewer:
5
No votes for this review
The wife and I like to play sex games. In this one, she had a choice of three different pouches. This one was the smallest, so she thought she was being smart. When I whipped out this tail her face turned red. This was her night to be dominated. She had never used a butt plug before, so this was hilarious to watch. I strapped her down on the bed and lubed up her butt and the plug and popped it in; she jumped because the metal was cold. She is a very tight girl already so it made everything else for the rest of the evening that much tighter. After she got used to it wasn't uncomfortable at all.

Next time I use this I am definitely putting it in the fridge first. My wife is into light bondage and doesn't like cold things so that could be a nice way to tease her a bit. Giving the tail a tug every not and then gave her a jolt.

I know someday soon it will be her turn to dominate me and I just know she will start with this little plug. I have to say I am a bit excited about that.
This content is the opinion of the submitting contributor and is not endorsed by EdenFantasys.com

My Vixen tags
About author