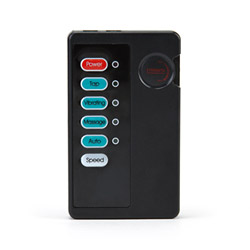 This remote control can be used with EdenFantasys ePlay and Tingle toy collections. It adds a nice shock to already high quality toys! You're able to adjust the speed and power of the electricity flowing through the toy, as well as cycle through four different settings.
Pros:
Four different settings, Adjustable speed, Adjustable Strength, Easy to use
Cons:
Very powerful even on lowest setting
Rating by reviewer:
5
No votes for this review

This controller is used as an accessory for toys that are compatible with it. It is compatible with all toys from the ePlay and Tingle collections by EdenFantasys. It's easy to use and figure out even for someone like me with almost zero electro-play experience.

Electro-play is great if you want to introduce a bit of pain play into things. While it doesn't exactly "hurt", it can be a slightly uncomfortable sensation after a while. The product page also says that you can experience a "hands free orgasm". I personally couldn't, but the way it pulses I can definitely see how it's possible.

I would advise against using it in water and you should lube up the area that you're going to be using the toy with. If you have any kind of heart conditions it's also a good idea to avoid this.

This controller has six buttons down the front and a dial on the side to control the strength of the shocks. You just need to put in two AAA batteries and plug whatever toy you're going to use into the remote. Before using the controller it's a good idea to make sure you have the strength turned all the way down.

To turn it on you just have to hold down the power button until the little light next to it turns red. Then you have four buttons for the different pulse settings. They're labeled: Tap, Vibrating, Massage, and Auto.

The tap setting is just a very quick jolt of electricity every half second or so. On the lowest setting it's strong enough to make your thumb twitch if you're holding the toy it's plugged into in your hand. On its highest setting it actually feels more like a static shock and I can't handle it for more than one or two shocks. The vibrating setting is basically the toy vibrating with electricity. It's a constant pulse and even on the lowest setting it's very overwhelming for me and I can't even hold it in my hand for more than a second to test it out. The massage setting is almost exactly like the vibration setting but faster. It's also a bit overwhelming for me. The last setting, auto is more similar to the tap setting but softer and slightly less frequent. I can handle the tap and auto settings internally but not the other two.

There's a button to adjust the speed of the vibrations as well and it does make a difference but it's actually difficult to hold onto the toy while it's shocking to actually test how many speeds there are.

You can store this along with whatever toys you're using with it. It's just a small rectangular remote that's only about two by four inches. If it's not plugged into anything it's honestly fairly discreet looking as well.
Follow-up commentary   I still like it 3 months after original review
I don't use the ePlay toy that I have for this. But the controller does work perfectly and the few times I've tried to use my strap-on with it, it's still going strong as far as battery life. I would definitely consider trying other toys in the ePlay line and at least give them a try with this controller.
This product was provided free of charge to the reviewer. This review is in compliance with the FTC guidelines.

Reviewed by Princess-Kayla ♥ (Eden Writer) Not a shred of evidence exists in favor of the idea that life is serious.
Rank
6.6
wrote 201 reviews
Comments
Make a post
Forum
No discussions yet.
Thank you for viewing ePlay electro-stim controller – e-stim control pack review page!
Top