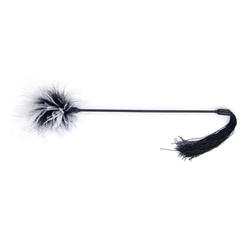 Whip her, tickle him!

This is a great little toy for anyone who wants to add a cute, fun, new addition to their toy box or for anyone who is curious about a little whip play but doesn't want anything too intense. Although the handle can be a little odd, I'd definitely recommend this and I'm glad I bought it!
Pros
Great for anyone, multiple uses
Cons
Awkward handle for spanking
Rating by reviewer:
4
extremely useful review

The Whipper Tickler is a great toy for foreplay and light spanking. If you're looking for some painful pleasure, this may not be for you. However, if you're looking for a little fun light play, go for it! I got this in black and white to go with a maid outfit and it worked out perfectly! The whip can be used for light spanking or as a tickler itself. I dragged it down the inside of my man's thighs while teasing him and got a nice reaction. It gives off a whole different feel than the feathers. When whipped by it, it gives a bit of a sting but nothing too intense. A hand definitely hurts more. The tickler end is very soft and can be used to tease your partner by running it down their chest, torso, thighs, and any other part of the body. He lightly ran it over my breast, nipples, and down my belly... it felt amazing! It's cute and not intimidating at all, definitely a nice addition for anyone who hasn't played around with whips before and is interested in experimenting.

The design of this toy is great! It has multiple uses and serves them all very well. It comes in black, pink, and red. As I've already said, I went with the black but all of them are equally cute! They all have black plastic handles with rubber whips, and feather ticklers. The website says it's 26" long but when I measured mine it only came out to about 24". The whip itself it about 7 1/2" long though so it's still a pretty decent length. The handle is long and wasn't an issue for me while I tickled with it, however, my man did say it was awkward trying to spank with it because of how thin the handle is. He was able to use it, just not as comfortably as he would've liked. A really nice feature is the longer white feathers that stick out of the black ones. They give a really nice and light unexpected feel. I tugged on both ends and they're both pretty secure. The only way it would come apart is if you put some force into pulling on it. 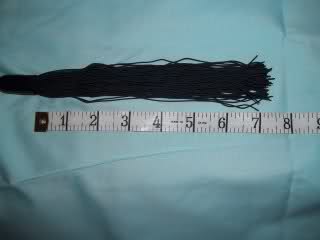 It is a smaller whip so it doesn't give off that much of a sting. If enough force is put behind it, it will leave your skin a little pink. It takes a while to get anything more than that though. It pretty much does exactly what any smaller rubber whip does, except it has an extra added perk on the other end! Both ends work well for tickling, depending on what you want it to feel like. It's great for teasing, and in my opinion performs exactly how I wanted/expected it too.

There isn't a lot to the care and maintenance of this toy. If needed, clean the whip and handle off with some warm water and antibacterial soap or toy cleaner. As far as the tickler end goes, you shouldn't get the feathers wet very often because it won't be much of a tickler if you do. No, you don't have to leave them dirty if you happen to get some lube or something on them. You can clean them in 5 easy steps!

2. SWISH the feathers around in it. (No rubbing or scrubbing!)

3. SWISH again, in clean water this time, no soap.

4. Gently shake the water off.


To store it I just stick it in my lingerie drawer and that seems to work just fine. The feathers are actually a loop so I suppose if you'd like you could hang it on your wall. It may weaken it and cause the feathers to come lose over time though.

I was a little disappointed with the packaging. The whip was pretty much attached to a piece of cardboard and thrown in the box for shipping. There isn't a lot of instructions, because they're not needed. It does have a few cute ideas on the back of the cardboard though. It really just would've been nice if the whip was in an actual package. 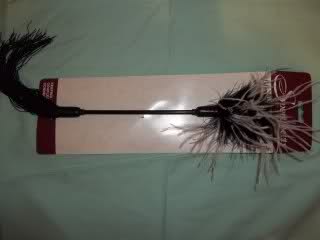 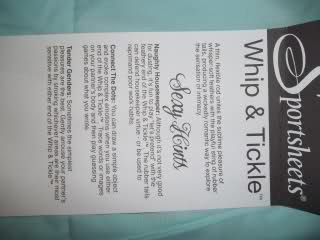 Follow-up commentary   I still like it 34 months after original review
I still have this and enjoy it when it gets used. It's not really a go-to, but it has held up well for such a small tickler.
This content is the opinion of the submitting contributor and is not endorsed by EdenFantasys.com