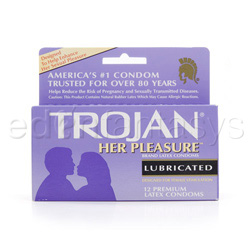 Trojan Her Let Down

Overall I would say that the Trojan brand "Her Pleasure Condom" falls extremely flat on its face. I would tell anyone to save their money and buy the normal kinds or even recommend the Twisted Pleasure if you want to actually feel a change. These condoms not only seem to break easier but also have no feeling different than a normal condom does. "Her Pleasure" is a term used lightly when discussing these.
Pros
slightly better feeling for the guy
Cons
Latex smell, Easily broken, Smaller
Rating by reviewer:
2
useful review
I was so excited when I first received these as a gift from my significant other to try. I thought they would be great at giving the pleasure of sex minus the condom without all the added risks, boy was I wrong. The first thing I noticed was the typical condom latex smell when they were first opened. Another thing that stood out to me was the size seemed as if it were smaller than the average guy. I know this is common with most condoms but I found it slightly intense for these particular ones. My first impression of these was that there wasn't very much to them. They felt and looked to be quite thin, which I believed to be due to the desired effect of not having one on for "her pleasure".

After getting into it for a while with my boyfriend, we started to have intercourse. It was nothing too rough but about five minutes into it the condom broke. This irritated both me and my partner. After taking it off, I chocked it up to my bad dumb luck. I was wrong. The second condom did the same thing as the first. After a few minutes the condom broke again. By this point my irritation level was quite immense and the box of condoms went into the trash.

The condoms did give my boyfriend the sensation he wanted, although the dread of having two in a row break I’m sure he didn’t want. He did say that for the few minutes it was on it did feel as if there was nothing there (although soon after there wasn't). The thinness of the condoms did not add to the overall feeling I received from the product. Before the feeling of dread that two condoms had broken, I was not able to even feel a difference between these and a normal Trojan condom.
Follow-up commentary   I still don't like it 10 days after original review
I gave these one final shot although they didn't break this time, they seemed to slip and slide more then my favorite childhood toy. They had no awe factor, and just felt like a slipper piece of latex. I was thankful for them not breaking on this occasion like had previously occurred, but i wouldn't bother buying them again. I chalk these up to no box for good.
This content is the opinion of the submitting contributor and is not endorsed by EdenFantasys.com

Become a Reviewer
My Trojan her pleasure sensations tags
About author