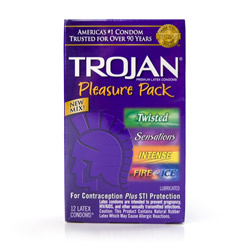 This is a great pack to buy when wanting to get a variety of condoms and not just buying a pack of all the same thing. I buy this pack quite frequently.
Pros
Great variety.
Cons
Not a fan of fire and ice.
Rating by reviewer:
4
useful review
Twisted Condoms... Oh my God! Best condoms I've tried so far. I thought the Her Pleasures condoms were amazing until my boyfriend and I tried these! I love em! My boyfriend is very large and we always had to use the Magnums, but these accommodated him very well! Worth a try.

These Sensations Condoms, on the other hand, I'm not a big fan of, but they are okay. They smell a little weird, and seem a little thick. I like the warming sensation, but it doesn't last very long. My boyfriend did not think they were terrible until he had to take it off, and he told me how it smelled. Durex makes great thinner condoms that don't stink like these.

Intense Condoms are absolutely great condoms. These condoms will help to stimulate your partner. I've tried several similar types of condoms and this seems to be the one with the deepest ribs. This would have to be one of my favorite condoms. My current boyfriend loves these condoms to.

Fire and Ice condoms would have to be on one of my most disliked condom lists. In my opinion, these condoms are too intense for most people. The fire sensation is literally like fire and burns like no other. I almost want to immediately take it off. The ice sensation isn't as bad. It was more of a minty cool tingly feeling. I enjoyed it more than the fire of course, but these condoms are just not for me.

The pack, in general, is an overall great variety pack to buy. I would rather replace the fire and ice for a flavor or something, but I guess I would just buy it for the others and give the fire and ice to someone who wants them. This is a great pack for someone who wants a good variety in condoms. I love this pack overall.
This content is the opinion of the submitting contributor and is not endorsed by EdenFantasys.com