Other Real strapless strap on reviews

The Realdoe is a great toy for lesbians, straight pegging couples, double-penetrating partners, and even solo time. It's fantastic for those who wish they had a penis, including but not limited to transmen and women with "penis envy." Feeling some days that I should have been born with a penis, I have come to think of this toy as my removable cock. I have included in my review a "Vroom" and "Bee" rating for the included optional bullet vibe.
Pros:
Looks real enough to complete the fantasy, Harness-compatible, Easy to clean and store.
Cons:
Slips out without a harness, Head may be too big for some.
Rating by reviewer:
5
extremely useful review

The Realdoe is made of silicone. I have never noticed any smell with mine, and the taste is only faintly rubbery. First and foremost, I noticed that it is substantially softer and more flexible than the original Feeldoe. It also has a matte finish to its surface, in contrast to the other, glossier Feeldoes out there. This gives it more drag, and makes the surface of the Realdoe feel more like skin than the average silicone dildo does. It has a detailed head, which gives a sort of pop on first insertion, and veins on the shaft that can be felt during use. People who are beginners to sex toys might want to look elsewhere and come back to this one when they've got some experience under their belt.

This toy is very realistic, though not quite as much so as some of the other realistic toys out there. The skin tone is like that of possibly a Hispanic person, so much darker than my own skin, but I find that the average man's penis is a few shades darker than the rest of his skin, and that feels more realistic to me. And it's a lot less of a lint magnet than its Feeldoe cousins.

Given than I now own two different toys from the Feeldoe line, you could say I like the design. The flaws are minimal compared to the fun to be had. The shaft has a wonderful curve to it that helps it hit my G-spot, and his P-spot. I like how pronounced the head is, as I've always been a fan of that popping sensation when it's first inserted. If you're very tight or very slender, the head might catch on your pubic bone, so watch out for that. At a size just larger than the average penis, sometimes this one's a little too big for me to take, but my boyfriend takes it like a hero. (Do the words "Ooohhh, god, you're so big!" mean anything to you?)

I think my favorite thing about the Realdoe is that which it's named after: its realistic-ness. I love just about everything about this toy, from its silly-looking vagina-balls to the veins to the velvety shaft, detailed frenulum, retracted foreskin, and meatus. When I wear it, I feel like it really is the penis I was never born with, and my boyfriend have adopted actually calling it my cock. 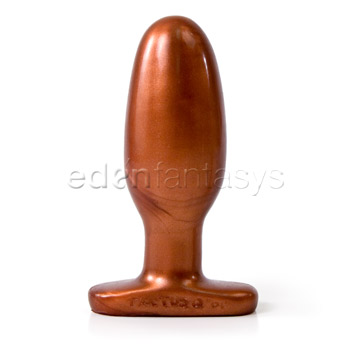 See what I mean?

Being made of silicone, this toy is easy to clean and care for. Hot water and mild soap, or toy cleaning wipes, will do the trick. For a more sterile toy, you can boil it in water for 3-5 minutes or wipe it down with a 10% bleach solution. Take care with nails and corners not to nick the surface of the toy, as it's soft silicone and could cause tears where bacteria can breed.

We store our Realdoe (among other things) in our new Devine Toys Lace Box , where it fits comfortably. Use only water-based lubricant on your Realdoe, as some silicone lubricants can react negatively with silicone toys. If you plan to use silicone lube, perform a spot test in an inconspicuous place on the toy a few hours beforehand. Check for any blistering, peeling, melting, or overly-sticky areas, as this is a sign that the lube has damaged the silicone.

This toy immediately became my favorite possession in the world, and my favorite sex toy to boot. Ever since the first time I heard of what a penis was (I was probably three at the time) I often wondered where mine was, and why didn't I have one? Still, I never felt like "a man trapped in a woman's body," like many transmen have so eloquently put it. I felt more like some days, it would be better if I had male parts, and some days I liked having my female parts. With this toy, my body can always be exactly what I want it to be, and if I'm out in public, I know right where what I need is, and that I can have it when I get home. Whenever I start to feel like that part of me is missing, I'll wear "my cock" around the house, and it always cheers me up and makes me feel better.

Reviewed by MeliPixie (Eden Advanced reviewer) A Pegger's POV is the only one you need! ;)
Rank
5.5
wrote 16 reviews
Comments
Make a post
Forum
Thank you for viewing Real strapless strap on – strapless strap-on review page!
Top