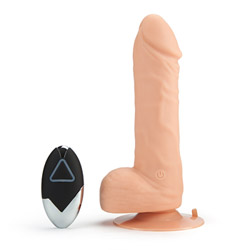 A Playmate For Playtime.

This vibrator creates wonderful sensations throughout the entire shaft of the toy. It can be used with or without the remote, and there's no worry about cords. Its waterproof design allows for easy cleanup as well, so you don't have to worry about getting the battery compartment or other components wet. If you're into amazing vibration, then this toy would be just right for your toy box!
Pros:
Can be used w/ or w/o remote control
Amazing suction
Waterproof
Has a multitude of settings
Cons:
Not flexible or squishy
May be too girthy for some
Lint and hair magnet
LED continuously blinks
Rating by reviewer:
4
extremely useful review

While the girth may be too much for beginners, more advanced users will find themselves using the suction cup base to ride this toy wherever they'd like, whenever they'd like. Since the toy has a scrotum, this toy can also be used anally and safely without worry of 'losing' the toy. The toy can be traveled with, but be sure to pack it well enough so it won't be discovered, or if you're not easily embarrassed should TSA find the toy in your bags.

The main compositions of this toy are flesh-colored silicone and ABS plastic. Silicone and ABS plastic are both non-porous, hypoallergenic, latex, and phthalate free. Silicone rates a perfect ten on the Eden Safety Scale, whilst ABS plastic rates an eight out of ten. There is a light scent to the toy, but it will quickly go away after the toy is cleaned for the first time. This scent can only be smelled if the toy is placed directly under the nose, and is a new plastic smell that most plastic vibrators come with. The vibrator has no taste to it, and it is velvety to the touch.

The Playmate is rigid with the ABS plastic beneath the silicone exterior, and so it is completely firm and has no pliability except at the very tip of the head and in the attached balls. This firmness makes the veined texture on the realistic design stand out, and can be felt during use. This veining runs the whole length of the shaft, and encompasses the front and back of the shaft. There is also a seam on this toy that runs along its center around the entire vibrator, but this seam cannot be felt during the use of the toy.

The texture, combined with the rigidity of this toy, is best suited for people who have had experience with firmer toys, and is not a great choice for beginners or those who do not like a lot of texture or rigidity.

The Playmate is realistically designed, complete with a urethral opening, glans, frenulum, foreskin, scrotum and scattered veining. The size of the Playmate may be intimidating for beginners, but intermediate to more advanced users who enjoy firmness and girth may find this toy to be the perfect playmate for playtime. Due to the realism of the toy, it is best kept out of sight, as it can be spotted easily for what it is. Traveling with the Playmate can be done, but be sure to pack it out of sight if you're easily embarrassed, and make sure to keep track of the small remote if you decide to take it with you as well.

The bottom of the toy is a suction cup that unscrews from the base to reveal the battery compartment. The remote that comes with the toy is an egg-shaped, semi-flat remote that is similar to that of a remote for a car, or a garage door opener and about the same size as one. On the back of the remote, there's a battery compartment that slides open. The toy has no curve and is completely straight, but the coronal ridge of the toy could provide g-spot stimulation. 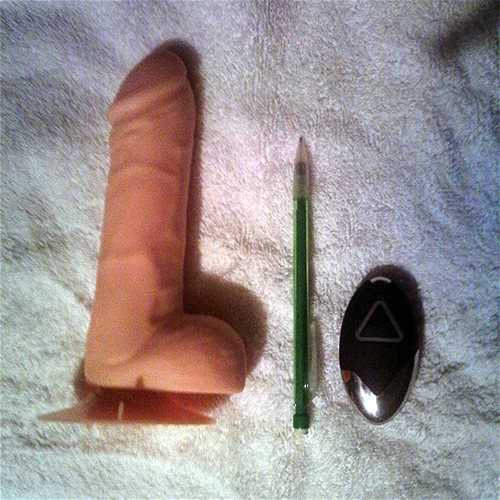 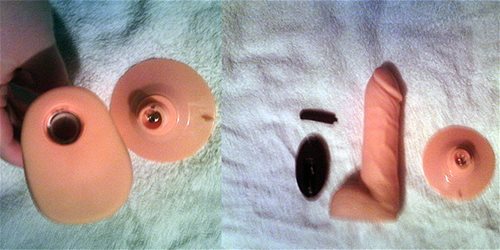 The Playmate's suction cup holds up well, and really clings to a smooth surface when the toy is placed on one. A little bit of water on the suction cup makes the toy cling to the surface even more. Unfortunately, when the toy is rocked back and forth, the base feels strained, and feels like the threads on the screw on portion of the base will break if too much pressure is exerted onto it. Make sure not to strip the threads of the suction cup, which unscrews from the bottom of the toy itself, as they're made of plastic and can do so easily. This suction cup also doubles as a means to use this toy in a harness, which you can unscrew it and fit it into an o-ring between the base and the toy.

Taking care of the Playmate is easy to do. Because it has mechanical parts, you will not be able to boil the toy, but due to the material, it can be fully sterilized. To clean the toy, you can wash it in warm soapy water, use a toy wipe or toy cleaner, or bleach it with 90% water, 10% bleach. If users are worried about the use of the Playmate with multiple partners, place a condom over it between washes. Make sure that you clean the toy thoroughly, and get into smaller areas with a soft-bristled brush.

Placing the toy in water will not harm the toy due to its waterproof ability. Fluids may get trapped in the indentation of the power button or between the suction cup and the toy itself. If this happens, unscrew the base and clean around the area with your soft-bristled brush or a cloth, but be sure to keep water from out of the battery compartment itself. Once you're finished cleaning the toy, set it out to air dry, or wipe it down with a clean towel or bath cloth. If fluids or lubricants get onto the remote, be sure to wipe it down thoroughly as well, but make sure not to soak the remote.

Always remove the batteries from the remote and the toy after use. The LED light for the toy is always on, so the batteries will run down if left in. Batteries can also corrode if left in the toy or remote too long, and can make the toy unusable. Use only water-based lubricants with the toy, and if storing the toy out of the packaging it came in, storing it with other silicone toys is fine, but refrain from storing the vibrator with toys made of Jelly, PVC or other lower grade materials. Store the toy in a cool, dry place out of direct sunlight.

On the box there was a lot of information, and included an extra instruction manual on the inside of the box that tells how to insert the batteries. 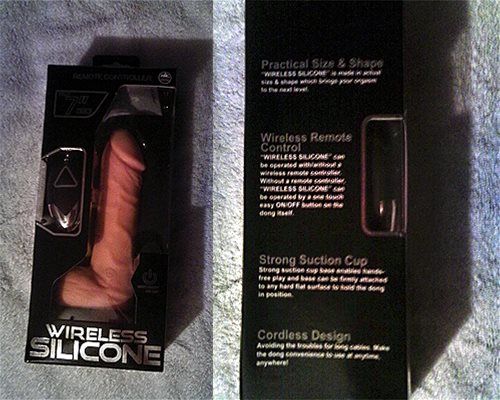 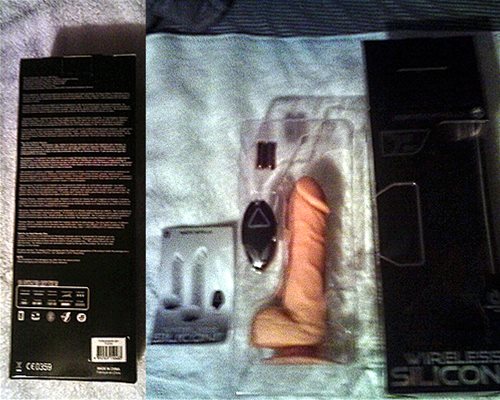 Back of box and plastic insert, box and instruction booklet

I gave this item four out of five stars because it was not flexible, and I had to worry about being too rough with it when it was suctioned to the floor or tub. I didn't want to strip the threads of the screw-on suction cup during use of trying to rock back and forth, because the toy simply wasn't made to move that way. However, bouncing on the toy was perfectly fine, and created wonderful stimulation. Some users will not like the rigidity of this toy, but for those who don't mind the plastic vibrators, this one is a great, realistic version of an old classic.