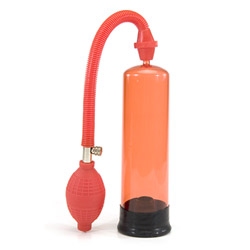 The pump is not an advisable buy as it does not provide the desired effect when removed and is also difficult to remove. May work better on smaller sized men.
Pros
Cheap and easy to use.
Cons
Penis does not remain engorged when removed and is painful to remove.
Rating by reviewer:
1
useful review
Having heard about penis pumps|Penis pumps my husband and I decided to buy a pump|A Handy-Dandy Guide to Penis Pumps: For Men to experiment with. Having read and heard many mixed reviews we decided to chose something, which is not very expensive. We ordered the Fireman's pump|Fireman's pump and on its arrival decided to try it out immediately. I tried out the suction on my hand and it does have the same feel as when one is taking your blood pressure. It is powerful in nature and the hand pump is easy to use with one hand. It does have a nice color and does provide some sense of excitement. However the excitement stops there. One can insert the penis into the pump easily and as it is transparent in nature it is fun to watch. It is exciting to see how the penis gets enlarged with every pump and the penis does look huge after maximum pumping capacity is reached. The amount of pumping and how effectively it works does depend on penis size. I do not think it would work well for a man with an extremely large penis.

With my husband the problem was attempting to remove the pump off the penis. It was difficult to remove and my husband did have some discomfort when attempting to remove the pump. It also left his skin slightly raw and red. The sleeve is made of rubber and is flexible but is still slightly uncomfortable to use. After the pump is removed the penis does not have the same rigidness and size as when inside the pump. It is the suction that enlarges the penis and once the pumping stops the penis goes back to the size it would be without the pump.

Perhaps it would work better if some lubrication were used results would be better.

I can say that it is not bad as a breast pump though or a nipple stimulator.
Follow-up commentary 5 days after original review
I heard about pumps and how they make one larger and firmer and thought it would be a good buy. I did not want to buy a very expensive toy as I was just into using toys and still getting comfortable with the idea. This toy arrived and it had the 'fireman feel' to it and the pump suction was soft and could be used with one hand easily. I fit into the pump and began pumping|Pumping Technique, my wife's eyes went huge as she saw me grow and I liked the feel and tightness of my penis. After I stopped pumping and tried to remove the pump from my shaft it was a problem. I could not get it off and the rubber at the base was hard and it was making my penis sore as the friction and rubber did not help. After a bit of a struggle we got it off but I was a little red and the erection that one gets in the pump does not last outside. I am glad I have my wife to help me get a really good erection|Penis Pump Guide: Erection and Ejaculation so pump or no pump we were good.
I would not recommend this as a purchase, it is a waste of money and it is collecting dust with the other toys in my hockey gear box. It is easy to clean and store and hot soap and water will do the trick and there is no hassle storing it.
This content is the opinion of the submitting contributor and is not endorsed by EdenFantasys.com