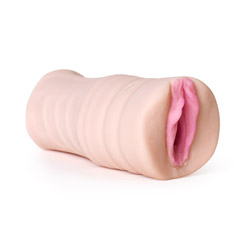 Faye Reagan is an excellent inexpensive pocket pussy. It feels incredibly realistic and is really durable. For the price, it's an absolute steal. I think Faye deserves a place in every man's arsenal.
Pros:
Realistic feeling, soft material, open-ended, inexpensive
Cons:
High maintenance material, may be too small for some users
Rating by reviewer:
5
extremely useful review

Faye Reagan Pocket Pussy is a male masturbator from Doc Johnson that is molded from the lovely adult star, Faye Reagan. Faye Reagan has appeared in hundreds of adult films and has won numerous AVN awards. In 2011, she was named #9 on a list of the top 100 hottest porn stars. Her pussy is definitely in demand. Now, thanks to this lovely little thing, you too can fuck Faye Reagan. It’s so inexpensive it won’t even break the bank.
Faye Reagan is meant to be used as a handheld male masturbation sleeve. However, it is not limited to such uses. With a little creativity and ingenuity, it can be used hands free. You can place Faye between two cushions that will hold her pussy in place and thrust away, hands free. Faye can also be used with a partner. It is an open ended toy so the head of your penis may pop out of the end. When used with a partner, this provides an excellent opportunity for some oral action. Your partner can slide Faye over your penis and orally stimulate the head of your penis.
Faye is devoid of any motorized parts so she is waterproof. I would avoid submerging her in use, though. She’s only compatible with water based lubes, which do not last long underwater. Using her in the shower, though, can be an excellent experience. Faye can retain some heat and warm water is the best way to provide a warm, realistic experience. Do not attempt to use a microwave or oven to warm Faye. I’d assume she’d melt and then you’d lose your best pussy. If you wish to travel with Faye, make sure she is well protected in her own plastic bag. She’s not discreet in any sense of the word so this is one to put in checked luggage.

Faye Reagan is made of Ultra Realistic 3.0, or UR3, which reaches a 2 on the EdenFantasys safety scale. UR3 is made of thermal plastic elastomer, which is a mixture of PVC and silicone. UR3 is phthalate free. UR3 is notorious for being a smelly material. Right out of the package, it does have a sickly sweet candy-like smell. It’s not overly unpleasant, but it is overwhelming. After washing and airing Faye out, the smell diminishes but does not fully dissipate.The UR3 does feel very realistic. Externally, it’s incredibly smooth, powdery, and not at all sticky. It does have some drag on the outside and it does collect a fair amount of lint. It feels like moisturized, powdered, hairless skin. Internally, it has the same feel but the internal texture creates a lot of drag. Faye definitely requires lube. Faye is flexible and supple but do not stretch her too hard or you’ll rip her. Overall, she’s much stiffer than other masturbators we have tried, particularly the Super Head Honcho, but she still manages to be soft and flexible.
UR3 is a very high maintenance material, which I’ll cover later.

Faye is a cylindrical masturbator. One end features an incredibly realistic labia, vaginal opening, and a hint of a clitoris and hood which has been molded from Faye Reagan’s anatomy. When she’s brand new, the labia and clitoris are painted a bright, hot pink. The rest of the sleeve is a pale beige skin tone. After washing Faye, the paint fades very fast. It does not affect the performance of the masturbator in any way. On the top of the sleeve, the words “Doc Johnson” are embossed in the material. My partner found this kind of distracting and a turn off, especially if you’re a visual person. On the shaft portion of the sleeve, there are four finger indents and a thumb indent to aid with thrusting. However, these are designed for a right-handed person. If you’re a lefty, like my partner, this can be annoying. The other end of Faye is open. You can cover this opening to create suction, or you (or your partner) can use this to stimulate the head of your penis.
Internally, Faye features an intense, deeply ribbed texture. The ribs are fairly close together and are easily felt in use, even with a large amount of lube. The ribs are soft and pliable so they should not be painful unless your penis is super sensitive. The ribbed texture lines the entire length of the toy.
In total, Faye is only 5.25 inches long. This should be an adequate length for most men since she is open ended. Only the most well endowed will find it too short to stimulate the majority of their penis. Faye is 7.5 inches in circumference, so it’s quite a bit to hold onto. She can stretch to accommodate most men. Men who are blessed and girthy (over 4.5 inches in circumference) may find Faye to be tight. It’s a matter of personal preference if it’s too tight or just tight enough to be enjoyable. My partner is larger than average and enjoyed how Faye “fit” but she was borderline too small for him. 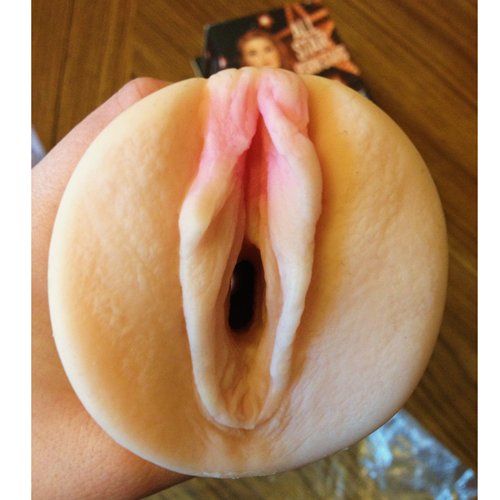 This is after the paint has faded. My partner was too eager to use it so I could not get a picture of Faye before she was washed. 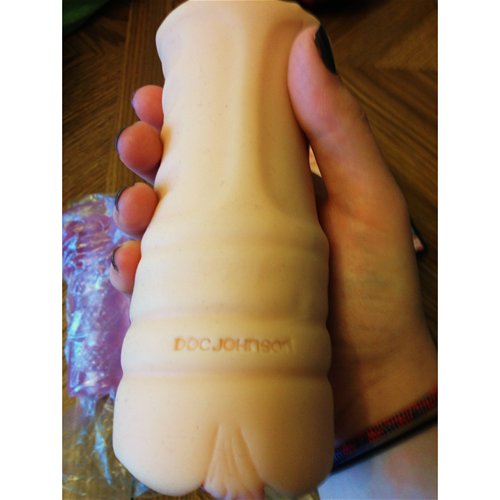 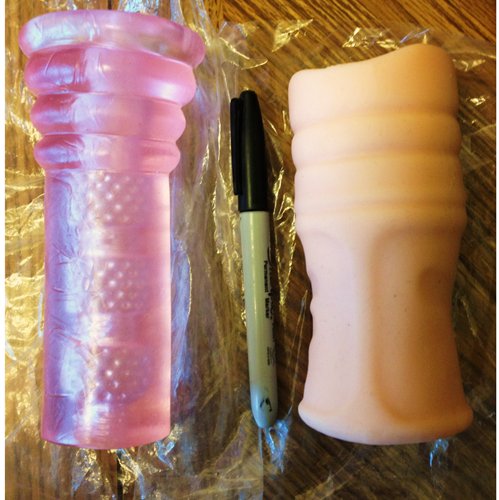 UR3 is incredibly porous so be sure to take great care of Faye. If you plan on sharing Faye, make sure you use a condom. To clean Faye, use water and anti-bacterial soap or your preferred toy cleaner. Be sure to clean her before AND after each use to prevent bacteria growth. To maintain the soft, supple feel of the UR3 you can dust Faye with cornstarch after she has been cleaned and air dried. The cornstarch prevents her from becoming sticky.
To store Faye, keep her wrapped in a plastic bag and store her in a cool, dry place. I keep her inside the original plastic bag inside my locking toy box. If she is in direct contact with other toys, the porous UR3 can absorb dyes from other materials. Be sure to use only water based lubes with Faye. Any other lubes can damage the material.

Faye Reagan comes in a black cardboard box. It features a picture of Faye in a bra and panties on the front of the box along with the name of the product. The back has information on the product and the side features information on Doc Johnson. The other side has a picture of the masturbator and says “This red-head is red hot! Faye Reagan-one of the most sought after adult superstars has it all- silky red hair, pouty lips, big supple breasts and the tightest pussy around! Molded directly from Faye, this feisty babe’s portable pussy is all yours when you want her. Slip on in today!” It’s not discreet in the least bit. Inside of the box, Faye comes in a plastic bag. The box and bag can be used for long term storage or you can use a Ziploc bag. 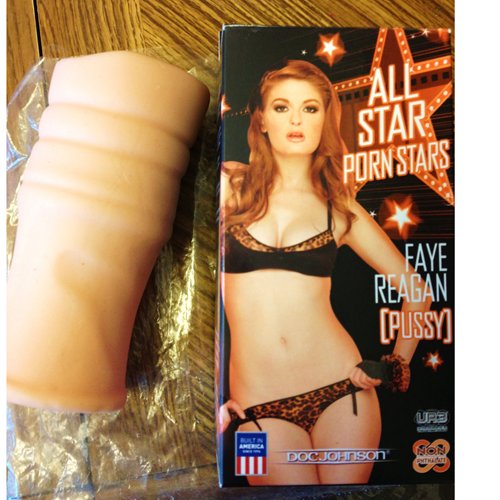 My partner loved this masturbator. It performs much better than other sleeves we have tried and it has been the least expensive one so far. For the price, it’s an absolute steal. While the material is pretty high maintenance, it’s worth it for such a realistic experience. Even if this masturbator rips, it’s easily replaced at a low cost. Faye and her peers definitely deserve a place in every man’s arsenal.

Belladonna's pocket pussy
$49.99
Follow-up commentary   I still like it 5 months after original review
My partner still reallys enjoys using Faye Reagan. It's held up to regular use without ripping or tearing, which is surprising for such an inexpensive masturbator. It's still his go-to masturbator. I'd still say it's an excellent deal for the price!
This content is the opinion of the submitting contributor and is not endorsed by EdenFantasys.com