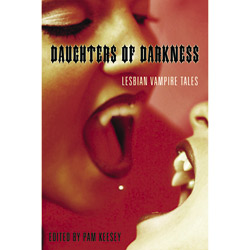 EdenFantasys
Other Daughters Of Darkness reviews


Editor Pam Keesey shares in her Introduction to the book that she is also a fan of vampire erotica and specifically lesbian vampire erotica which started after she saw a screening of the movie The Hunger. She embarked on a search for more about lesbian vampires expecting that it was a new fad. What she discovered was that lesbian vampire erotica is as old as storytelling and some of the oldest stories are just as erotic as anything currently being written. In some circles the belief is that the Countess Bathory was the basis of the Dracula story not Vlad Tepes though both legendary characters can be combined to form a terribly evil monster! Ms. Keesey traces her research for the reader in her introduction and sets up the stories in an attractive and interesting way.


In Dracula Retold by Zana, we meet a repressed housewife by the name of Lucy Harker who meets a female Dracula and all sorts of hardship befalls poor Jonathan! He finds out whether life as a ladybug is more to his liking.

In medieval Sibiu, Transylvania it is a crime to either be a vampire or a lesbian but the main character in I, Vampire by Jody Scott, is rather vague about what has really caused her family to go insane! Obviously they are not at all pleased that she has admitted she sucked the blood of a priest but she hints that her lesbian tendencies might also be an unforgivable crime. Either way the story is quite compelling and actually one of my favorites in this anthology.

Carmilla by J. Sheridan LeFanu is almost novelette length and is written in an old style that might be a tad boring to some readers. It was written in 1871 and attempts to retell the poem Christabel by Samuel Taylor Coleridge. Carmilla chronicles the story of Millarca Karnstein who calls herself Carmilla and seduces a very young and impressionable Laura. The story is timeless and well worth the read.

Elaine Bergstrom offers up a retelling of Countess Elizabeth Bathory's tale with a more appealing and needy heroine who just wants understanding and love from another of her 'kind' in Daughter Of The Night.

For a real departure from the norm of vampire lore we are offered Louisiana 1850 by Jewelle Gomez. In this story Gilda is black, female, a slave, a lesbian and a feminist! She embraces vampirism and escapes her slavers after losing her Mother, her only salvation in a world completely bent on her destruction. This is a very strong story and the imagery is disturbing at times.

In Oh Captain, My Captain by Katherine V. Forrest we are taken on a science fiction adventure where we meet Captain Drake the vampire commander of the Scorpio IV. She is totally vampire but also totally lesbian and in search of something more than just existence.


Daughters Of Darkness features 10 stories written by various authors most of whom I had never met before. In this anthology the editor Pam Keesey did not offer up her own work but rather collected the work for her reader's enjoyment that best exemplified the subject matter in her opinion. The author's she chose are: Zana, Jody Scott, J. Sheridan LeFanu, Elaine Bergstrom, Jewell Gomez, Robbi Sommers, Karen Marie Christa Minns, Pat Califa, Katherine V. Forrest and Anna Livia.

The end of the book features a filmography of all the films mentioned in the book as well as a complete bibliography.
Follow-up commentary   I still like it 8 months after original review
I still like the book but we have seen that it really isn't a book that appeals to everyone. Even in my small circle of family/friends/lovers the book has gotten mixed reactions. Personally? I really like it and read some of the stories again and again. This really is targeted toward a specific segment of the reading populace.
This product was provided free of charge to the reviewer. This review is in compliance with the FTC guidelines.