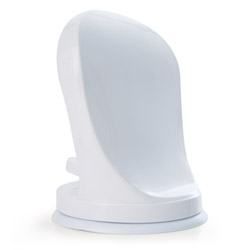 Great idea and design, but one fatal flaw

The Locking Suction Footrest is a great product that works beautifully ... if you have the right surface for it. Smooth showers work best with the tightly suctioning back. While the suction mechanism is tight, it provides a good seal and a stable surface to place your foot in the shower.
Pros:
Great design, stable surface, tight seal.
Cons:
Tight mechanism, won't suction on small tiled showers with indents.
Rating by reviewer:
5
extremely useful review
I really high hopes for this suction cup foot rest. I have a tiny shower and have been looking at the Sex in the Shower line of products for the longest time in the hopes that I would have something to hold onto while getting frisky in the shower. Turns out ... well, I was disappointed. The design and idea of this product is a really good one. Suction cups work amazingly in wet environments and usually work very well at that. The problem is that they need an entirely flat surface to adhere to.

My problem I have a tiled shower with deep grooves between the tiles. The size of the tile is just perfectly small enough so that I can’t get the ginormous suction cup to not touch a grout groove. What does this mean? The suction cup will not adhere to my shower wall. I tried several different times in several different ways. I tried wet wall and dry cup, dry wall and wet cup, dry both, and wet both. Yeah, no dice. I tried positioning it between tiles, on top of tiles, etc. Still nothing. Just to be on the safe side I tried it on a flat surface - my bathroom mirror. It stuck there perfectly! Stayed super tight and didn’t budge at all no matter how much pressure I attempted to apply to it. The problem is that my mirror is clearly not my shower and as much as I tried I couldn’t make this suction cup stick anywhere in my shower. That being said, I'm going to keep this and use it on a shower that isn't tiled like mine. Bring it to a friend's place and get some use out of it there. If your shower has tiles, I'd consider that when adding this foot rest to your shopping cart.

I really like the idea and design of this product regardless of how it works in my own shower. A lot of times when you’re in the shower you need to lift your leg up to do whatever, whether it be having sexy times with a partner or simply shaving your leg. Holding it up for long periods can be painful and I know in me it makes my legs shake and sometimes I get leg cramps. There are certain in-shower sex positions that would be made much easier with this foot rest and allow for longer shower time together alone or with a partner.

The actual footrest portion of this is very large and can easily accommodate a variety of foot sizes. It’s somewhere in the 4 inch to 5 inch wide range and easily just as deep. The front curves down slightly so there’s no hard ridges or grooves for your foot to catch on. If you’re keeping this up in the shower when you may have guests over who you don’t share your sexual side with, there would be no indication this suction cup foot rest can be used for such. It simply looks like a foot rest or possibly even a soap dish. It’s white all over and has no distinctive marking on it.

The locking mechanism of this suction cup is kind of hard to flick into place though. It’s extremely tight and I closed my eyes and flinched when it finally clicked in place. That being said, this also means it provides a good suctioned seal and will hold more weight because of this tight mechanism. It takes a bit of practice to get the mechanism working right and I bet with time it will also become a bit easier to handle after placing and replacing it.

One concern I do have with this product is that it’s plastic and if you leave it up in your shower it may get shower mildew on it if you don’t clean it properly. Honestly, I think you’d be able to clean the footrest part of it with regular shower cleaning materials, but I’m not entirely sure. There’s really no contact with any genitals or really even any bodily fluids so there’s not really a sanitizing concern I would have with other products. After all, you’re using this in the shower, so hopefully there’s soap close by to wash anything off that would happen to get on it.
Follow-up commentary   I still like it 2 months after original review
Having not moved from the apartment where I originally received this, I'm still unable to use it on my shower tiles. Sigh. I can't wait for the day to use this though because I love the design. I've talked to people about it and suggested loaning it out to them because they have tiles that will work with it. I may just put it on my mirror and use it as a stand for something until I get larger tiles.
This product was provided at a discounted price in exchange for an unbiased review. This review is in compliance with the FTC guidelines.