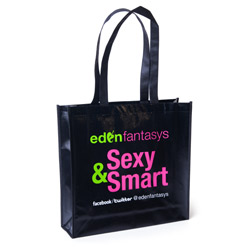 What a nice tote.

This is a convenient tote bag, with a multitude of uses - and it's only $2.00! Or, you could add it to your order for free, like I did. Either way, the price is certainly not bad, and if you don't mind walking around with the EdenFantasys logo, then you will like this bag!
Pros:
Free, practical, basic, alternative to plastic/paper bags, durable, lightweight
Cons:
May not be discreet enough for some people/situations, wish there were more designs!
Rating by reviewer:
4
extremely useful review
I like that this bag is black, and that it is very basic. One side is probably more discreet than the other, though both have the logo. One side has alternating pink and green leaves with "edenfantasy.com" below the leaves. The other side has the EF logo, with "Sexy & Smart" and mention of EF on Facebook and Twitter. Other designs could be nice, and I'm sure people wouldn't want the logo to be so apparent. But that is branding, it is an EF bag after all, so what can you do.

There are so many things this could be used for! Picking up groceries, going to the gym, carrying books, or even better- for storage! I don't intend on keeping my toys and things in this tote permanently, though I have found it to be very convenient for storing things, particularly today. I decided to finally get a tote with the first order I've made in a while, I added it as a free gift since I already have a lot of wipes for now. I took everything out of the box it was shipped in and had it all laid out on my bed, but I had to go to class and was expecting people by at any time so I wanted to get all of my toys and lingerie out of the way before anyone came by. Everything was out in the open, but I didn't feeling like storing it with my other toys/lingerie before reviewing them. Then I noticed this tote bag sitting amongst all of my lovely new items and I put everything I have not reviewed in it for sorting and reviewing later. I have the bag sitting out on my floor with everything in it, but it just looks like a regular reusable shopping bag. Granted, the EF logo is on it, but it's discreet enough for these purposes. The bag itself isn't transparent by any means, it is black on the outside, the inside is white fabric. Since I have a piece of lingerie on top of the stuff in the bag, even if anyone glances, they won't see anything I don't want them to, it will just look like I have some sort of clothing in a bag. So for that reason, I am really glad I got this bag with this order!

The bag itself is very light, it's some sort of canvas fabric. It's fairly thin, but probably sturdy enough for whatever one would typically use a tote bag for. It seems to be stitched together well. The outside seems very easy to clean, if you just wipe it down with a cloth, due to the finish of the exterior. I'm not sure about the inner fabric, or how this would hold up in a washing machine.

I would give it 5 stars, though there are times and places where I would not feel comfortable with this bag, as much as I love EF. Though if you personally didn't mind and really wanted to go all out, you could pick up an Eden towel (which I have wanted to do, even though I don't like logos on things) and you could pack it in this tote and take it out for a day at the beach!
Follow-up commentary   I've started to like it more 2 months after original review
I like this tote! I've actually started to like it more than when I first got it. I ended up getting another one. I was considering giving one to a friend, but I might keep it. I was worried at first about them not being discreet, which I will admit is still a concern. I still wish they had a more discreet design available. However, I have used this bag a number of times. I brought it with me shopping once or twice, it's great for groceries. It's awesome for caring cans and bottles that you are bringing out to recycle. A friend of mine came by and I gave her some things and she needed a bag and I let her borrow one of these to use. They have come in handy more than I would have expected. They seem to be sturdy, the bottom didn't tear out or anything when it was full of groceries. This is a very worthwhile free gift.
This content is the opinion of the submitting contributor and is not endorsed by EdenFantasys.com