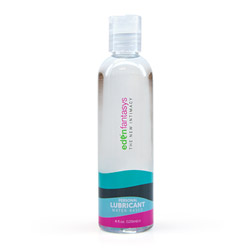 A nice water-based lube that has a soft, velvet-like texture. It's long lasting and doesn't leave any kind of unpleasant residue. It leaves your hands feeling kind of soft but not sticky or tacky.
Pros
Velvet feeling, Long lasting, Affordable, Absorbs nicely, Not sticky or tacky
Cons
None
Rating by reviewer:
5
No votes for this review

This is a really nice water-based lube. Since it's water-based, it can be used with a huge variety of toys as well as condoms. Silicone or oil-based lubes can sometimes ruin toys or even dissolve condoms.

The bottle is pretty discreet as long as someone doesn't actually pick up and examine the bottle. It's a clear bottle with a clear label that has the EdenFantasys green leafy logo and then the name of the product in blue. But the clear background makes it kind of difficult to read the bottle from a distance.

It's just a clear liquid with a consistency similar to a runnier dish washing liquid soap. If you turn the bottle upside-down the lube immediately splashes down again. So it does come out of the opening pretty fast. You have to tip it slowly but it's not very difficult at all to keep it at a small amount.

It's a very soft-feeling lube but it's not sticky or tacky feeling at all. It has an almost silky texture to it. If it absorbs into your hands/fingers it does leave a residue but it's a kind of lotion-like feeling that it leaves behind. You still want to wash your hands afterwards but not necessarily feeling like you need to stop sex to wipe your hands off mid-sex.

I do have a bit of a problem with dryness so I often have to use lube right before any kind of penetration. Some lube will absorb almost immediately but so far I haven't had to reapply this one at all.

This is honestly one of the best lubes I've used. I really love the soft texture a lot. It's also so important to me that it lasts the entire time I'm having sex. I've used a lot of lubes that I've had to use two or three more times during sex and it's just so quick to ruin the mood sometimes.

I also love that you don't have to use much at all. This bottle is going to last so long. I've been using it pretty often and it's still not even a quarter empty.
Follow-up commentary   I still like it 3 months after original review
We've almost used up the entire bottle of this lube and I still don't have any complaints. This is just a really great lube.
This product was provided free of charge to the reviewer. This review is in compliance with the FTC guidelines.

Reviewed by Princess-Kayla ♥ (Eden Writer) Not a shred of evidence exists in favor of the idea that life is serious.
Rank
6.6
wrote 201 reviews
Comments
Make a post
Forum
No discussions yet.
Thank you for viewing EdenFantasys personal lubricant review page!
Top