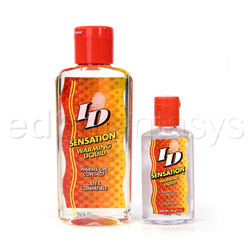 This is not recommended for those who expect a strong warming sensation. There are other warming lubes out there that pack more of a warming sensation punch than this one did. ID sensation warming liquid would make a better massage lube than an arousal lube.
Pros:
The price, good for a first time lube, good for people who can't handle intense warming sensations.
Cons:
Dries out over time, gets sticky, not very intense.
Rating by reviewer:
2
useful review
This was the first warming lube I've ever bought, so I was excited to try it. The bottle is pretty and was what initially caught my eye. I was also attracted to the fact that there was a 1.5 oz bottle available to try, so I didn't have spend more money for the bigger bottle if I decided I didn't like it.

The consistency seems to be a little greasy and runny, which was a problem for me when I applied it to my toys. The lube just seemed to run down the toys and make a mess. I also noticed that this lube tends to dry out extremely fast, leaving behind a sticky feeling. Nothing kills a mood faster than having to stop and apply more lube. Cleaning up was a pain, too. I found that this particular lube left little grease stains on my sheets, which sucks. Also, it seems to leave a smell in the air.

When I got this, I put a little on my finger just to see what the warming sensation was like, and it had a mild warming effect when the lube was rubbed in. Having tried that, I proceeded to using it on more sensitive areas. This lube was a let down below the belt. I hardly felt anything on my clitoris; no warming sensation at all. This was the point where I was glad that I only got the little bottle.

Overall, as my first warming lube, it was a let down. From the greasy, runny mess it makes, to having no clitoral stimulation whatsoever, I would recommend this lube more as a warming massage lube rather than an arousing lube. I would say it's an okay lube for those wanting to experiment with warming lubes, but don't expect a firework finish.
This content is the opinion of the submitting contributor and is not endorsed by EdenFantasys.com