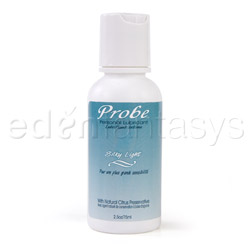 This is an average water based lube that surprisingly didn't cause any reaction from my body. Usually I have problems with any product that contains glycerine being used on my vagina, with Probe Silky Light I had no problems. It lasts a reasonably long time and despite being stringy and a bit slimy it does the job for anal sex, PIV sex, toy usage and hand jobs. For the price the 2.5 oz bottle has lasted through many uses and I expect that we'll be purchasing it again when it runs out.
Pros:
Feels natural, last quite a while, no unpleasant smell or taste.
Cons:
Stringy, somewhat slimy, contains glycerine.
Rating by reviewer:
3
extremely useful review
Probe Silky Light is my first experience with a stringy type of water based lube. This lube is VERY stringy but feels almost identical to my own natural lubrication. It is Sigel's favorite for that reason though he warns that you will be looking for a pair of scissors to cut the stringy bits.

The ingredients are: purified water, vegetable glycerine, polyethylene oxide, grapefruit seed extract. The only long difficult to pronounce ingredient is polyethylene glycol which is simply a polymer suspension that forms the base of the lube. It has an extremely low toxicity and is used in a number of medical and pharmaceutical preparations. It can act as a mild laxative, though in the amounts you would naturally absorb through use it is doubtful it would have any effect other than it's intended effect, which is to make the lube very slippery and stringy. The vegetable glycerine helps to maintain the stability and lubricity of the lube. I was really unsure about using the lube near my lady bits due to the problems I have had in the past with glycerine products (yeast overgrowth) but with the addition of grapefruit seed extract (advertised as Natural Citrus Preservative) I decided to give it a try. As of yet, after three generous applications I have not experienced any itchiness or the other bug-a-boo bacterial overgrowth.

Probe Silky Light is actually pretty good in the shower lasting longer than less stringy lubes but still not as long as silicone. It is rather useless in the bathtub. it doesn't dry flaky or sticky and washes clean away with warm water and soap. It doesn't leave a residue if it's just wiped away but because it does have glycerine in it I always wash after using it. As with most water based lubes it doesn't make a very good massage oil, it goes on feeling somewhat slimy or greasy, and soaks into the skin rather than providing a slick surface for massaging.

It comes in a white, opaque, plastic bottle with a flip top lid, and light blue label with white writing. The only words easily noticeable are Probe and silky light making it a discreet product you could leave by the bedside and not be embarassed.

This lube is not flavored and has an almost not there hint of sweetness but otherwise no taste at all. It has a clean fragrance that is not irritating to my sensitive nasal passages.
Follow-up commentary   I still like it 4 months after original review
This is Sigel's go to lube when he needs a good water based lube. It is very stringy, very very stringy! Still it feels like the real thing and he loves it! The bottle has lasted way longer than we thought it would mainly because he doesn't feel the need to reapply it often. It washes up easily which is another plus in his book. It works very well for intercourse as it mimics the natural feel of a woman almost flawlessly. He does warn that if you are squicked by "strings of mucous like substances" this will probably not be your favorite!
This content is the opinion of the submitting contributor and is not endorsed by EdenFantasys.com