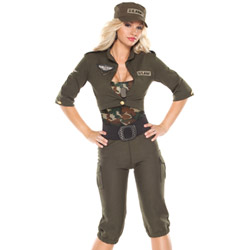 Cute But Could Have Been Better!

I was hoping for more out of this outfit. I got it for going out with the little ones Trick or treating. One thing I can say it did keep me warmer than I was last year. There were many things that could have been different about this outfit. But I can get wear out of the pants and tank alone.
Pros:
Hat fits perfect, Pants fit great, Love army fatigue
Cons:
Belt part is not detachable, Belt is too tight, Tank top is short, Jacket too short
Rating by reviewer:
3
extremely useful review
The Army Girl costume is made by Coquette. It comes with 5 pieces. This outfit can be used for role-playing if you want to get down and dirty with a sexy Army chick. I used mine to go out for Halloween. I sure can say it kept me warm though. It was really cold outside.

The set includes a cropped jacket, Cargo pants, Tank top, Hat, and Dog tags. The tank top is is a green and brown camouflage solid pattern. The tank top has no underwire. I did not where a bra with mines but the straps are wide enough to hide a bra under it if you wanted to wear one. I was kind of upset at the tank top it was kind of short and rolled over my little pudge in my tummy. The only way it stayed down was if it was worn just like how they show in the stock photo. You have to tuck it in your cargo pants. When I did that I had no issues. Another issue I had was the strap kept falling down. I thought they stay in place but I had to keep pulling them up. The last issue with the tank was there was no tag to tell you the front from the back. I had to hold the tank up and figure it out myself. You can tell because one part is shorter than the other.

The cropped jacket is all green. It does not cover the whole back on me like it does show in the stock photo. It was also very snug on me. There is a patch on it that says U.S. Army on the left side above the chest area. On the right side there is a broach. The broach has a black plastic part to it and it is in the shape of wings. This part is detachable from the jacket. On top of the plastic part there is a medal eagle in the shape of the wings and it has a face on it. There are gold buttons on each of the jacket sleeves. Which I don’t think will last too long on there. There is also one at the bottom of the jacket where you close it up at. This part is made of Velcro to close it. My button is hanging on by a thread it is ready to break and this was not on my part. It came out of the package like that. On the top of each shoulder there are gold buttons as well on a little flap part, which the flaps are just sewed on and look like they can easily tear as well. On the right sleeve there is also a patch with a eagle symbol on it. This one is held together well.

Now onto the cargo pants. These are so cute. The belt is a little flashy and not removable. But not to much that it will bother me. The cargo pants are green in color. They have two decent size pockets on the side of each leg. I could fit my cell phone in them. The only thing it does not do is close or latch. There are no buttons on them. The pants are tight fitting at the end part of the leg. It came down a little over my knees but it was snug as well at the part in the back. I had the ripples from the pants in the back of my knees when I came home. The crotch area fit very well. I thought the stock photo looked a little funky but it did not look the same on me. They hugged my hips just right.
Experience
{HAD TO PUT THE REST OF THE STUFF IN MY EXPERIENCE SECTION THE FIRST TIME MY REVIEW EVER WENT OVER 800 CHARACTERS. THANK GOD IN MY REVIEW I PUT IN THE THINGS I LIKE AND THAT I DON'T LIKE. IT WORKED OUT WELL.}

The only issue I had besides the bottom part was that the belt was a little too tight. I had to fold it down when I put them on but once up it was all right. The belt was form fitting though not enough to bother me to bad but it did. The belt is made of elastic and is black. It has pretty little gems on it. The belt is not detachable at all. So you will be wearing it when you put these on. I can use these all the time just to wear out and I plan too. I do wish they were a little bit longer though.

The hat is too cute. I was afraid it would not fit my wig right. Yes I said wig. Like I said before I am always changing my hair. Today was rainy out and I wanted to wear my wig. Sometimes I get hats that don't fit on it right. I was glad this hat did. The hat is all green with a patch that says U.S. ARMY in the front. There is no strap to adjust it yourself; it has built in elastic to stretch out when you put it on your head. Under neath the hat there is a white mesh type of material or it can be plastic but a thin one. It was not irritating at all. There are no care instructions on the hat. My hat did have some loose threads but those can be clipped off without ruining them.

There was a metal dog tag that came with it. They could have done something better with it. Either put the words U.S. Army on it. It was just a plain metal dog tag. It was cute though, but I have seen better even if it was for a Halloween costume.


The Army Girl costume came in a plastic bag. I threw this out because I am keeping mine in a drawer. It came with a plastic hanger and a cardboard paper to show you what the outfit was. This can easily be put in a suitcase to travel with. Or an overnight bag.

I give this costume 3 out of 5 stars. Yes I mention a lot more flaws then anything but I still think it is cute. I just wish they put more thought into some of the things it was made of. Plus I wish the belt area was not so tight. But I will be wearing this just not as a costume or in the bedroom. I will make it into an everyday outfit. 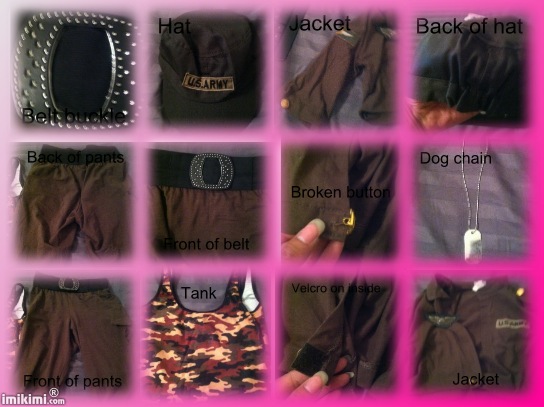 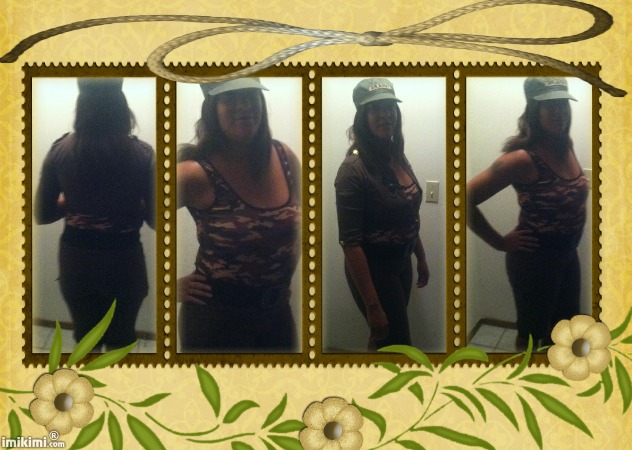 Follow-up commentary   I still like it 4 months after original review
Waiting for spring to get here so I can wear the pants out. Too cold right now being capris and also for the tank.
This product was provided free of charge to the reviewer. This review is in compliance with the FTC guidelines.

My Army girl tags
About author