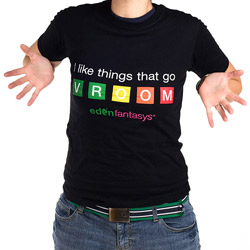 The fitted design of the EdenFantasy t-shirt makes it a better option for people like myself who prefer babydoll type t-shirts. However, the thinner material and cut is probably best for people with leaner frames and longer arms. Beware that it sags by the end of the day.
Pros:
Soft, fitted
Cons:
Stretches out during use, no sizing chart, no care instructions, loooong sleeves
Rating by reviewer:
3
extremely useful review
The bright design of this shirt caught my eye but I was immediately disappointed when I saw that it was unisex. The typical band tee cut tends to be really boxy and awkward on my curvy shape so I opt for babydoll cut shirts most of the time. I'm used to the smaller cut and that's definitely a good thing with these shirt as they are actually fitted so they run narrow through the arms; however. Because of this, you may want to order a size larger than normal. This is especially true with the larger sizes (XL through XXX). You can take a look on the forums and other reviews and you'll see that.

However, my experience with the large has been less surprising. The cut isn't as slim as a babydoll large so it's still a little loose on me, especially around the ribcage where it doesn't go as drastically inward. I could probably wear a medium but it'd be more snug around my curves. I would recommend erring on the size of too larger than too small because the cotton material is thinner than your typical tee and becomes translucent as you stretch it. In the event that you're more conservative, you might want to wear a black tank under this shirt.

That could also help to smooth out any bulges, which the somewhat-clingy fabric tend to highlight, unfortunately. For this very reason, I would think twice about this shirt if you're carrying a lot of extra weight and are also concerned about it being flattering.

As I mentioned, this shirt is thinner than expected. It's probably thicker--and smoother--than your average Hanes undershirt but it's definitely thinner than a band tee. I've had similar shirts before and they tend to lose a bit of their silkiness after a few washes so it will be interesting to see how it holds up. I do like how cool it is, even for a black tee.

The material offers a bit of stretch so there's a little leeway. Unfortunately, like any stretchy item, it tends to sag over time. At the end of the day, this shirt looks sloppy because of the sagging. This is a common problem with t-shirts but one I wish I could avoid, nonetheless.

If you're not a fan of long sleeves, you may wish to look at something else. I'm not a tall person at only 5"2' and I have the short arms to go with it. The sleeves on this are almost down to my elbows and I'll probably wind up permanently altering them so they're shorter.

On the other hand, this shirt isn't as long as I expected. It doesn't even fall to my mid-butt. I don't mind because overly long shirts tend to make me look lumpy and strange.

I have one odd complaint and that is about the design. Each of the letters in "VROOM" is encased in a brightly colored box, following the colors of the rainbow. Except the first two both just look green to me. One is slightly darker but, in my opinion, they're far too similar. I'd like to see the "V" in a vibrant blue, instead!

Interestingly, there is no URL on this shirt so, if someone wants to know more, they'll have to talk to you. Perhaps this shirt is not for the shy (perhaps that is a given?)? I actually don't like URLs because they mostly wind up on the back of the shirt but it's kind of an interesting advertising tactic in that it doesn't make it much easier for people to discover EF.

As other reviewers have mentioned, there's no tag. Yay for comfort, boo for lack of instructions (the shirt simply comes folded in a plastic bag so there's no help there). I'll throw this in the wash with the rest of my black clothes (of which there are many). Other folks recommend washing on cold and inside out, which isn't bad advice. A laundry cycle will shrink the shirt back to size and you're ready to wear it once more.
Follow-up commentary   I don't like it anymore 25 days after original review
After wearing and washing this shirt a few times, I've noticed that it's definitely shrinking.. vertically! It's no longer long enough for me to wear out comfortable so it's become a stay-at-home/PJ item but, even then, I need to give it a good tug periodically. On the bright side, it's not stretching out so much that it's sloppy anymore but definitely do NOT consider this pre-shrunk. Wow!
This content is the opinion of the submitting contributor and is not endorsed by EdenFantasys.com