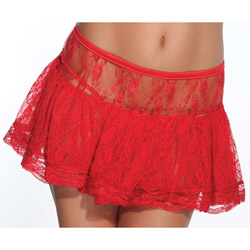 This lace petticoat is a pretty good buy for the price. The skirt isn't rough or cheap feeling. The quality and construction are pretty good. I think the one size fits most petticoat should fit up to size XL pretty well, which is a great range for a one size fits most garment. I like that it is offered in three colors, red, black, and white. The only downside is that it doesn't really add any volume to skirts.
Pros:
cute, great price and quality, should fit up to size XL, variety of colors
Cons:
doesn't add volume to skirts
Rating by reviewer:
4
extremely useful review
I recently decided I wanted to purchase a sexy costume. I haven’t really decided yet if I want to wear it for Halloween or just around my home. The costume I chose is modeled with a petticoat underneath the skirt. Fortunately, EdenFantasys carries a petticoat in the shade I need. Unfortunately, the costume I wanted to wear it with went out of stock as soon as I had a chance to make an order. For the time being, I decided to get the petticoat. The petticoat is available in black, white, and red. I chose the red petticoat.

The petticoat comes wrapped in a cellophane bag. It is on a hanger, which I liked, since it will keep my petticoat from getting wrinkly by being in a drawer. There is a tag attached to the petticoat that displays care instructions: hand wash, do not bleach, and hang up to dry. A small tag inside the garment states the material content is 100% polyester. The petticoat is made in China.

A petticoat is pretty much used to add volume or a frilly trim to a skirt. They are not designed to be worn on their own. This particular one is made almost entirely out of see-through red lace. The waistband is made of a soft, ribbon-like material that has a lot of stretch to it. The lace itself has a floral print with a scalloped trim along the bottom. It stretches only a small amount. There are two tiers of lace to the petticoat. Both tiers end at the same point. The lace feels a bit rough, however not enough to make me feel itchy or uncomfortable. On the back of the top band is a row of three plastic snaps that are used to open the petticoat and adjust the tightness.

I think the construction of the petticoat is pretty good. There aren’t any bad stitches or loose threads hanging off of this, despite the low price tag on it.

Initially I thought this would work well for those who fall within the 1X/2X range for Coquette. However, that would cause the skirt to be less ruffled looking a little bit more flat and plain. If the size XL is anything like the one size fits most petticoat, I think it should work for those who are plus sized. For this size, I think anyone up to the larger end of XL should fit just fine.

Like I said before, I do not have the costume I wanted to wear this petticoat with. However, I was able to test out the fullness of the petticoat with some short skirts. I tried out all three skirts with my petticoat and didn’t notice any difference in fullness for any of them. I think if Coquette had added a layer of crinoline between the two layers of lace, there would have actually been some change in the volume. As it is, the petticoat only offers a cute lace trim beneath skirts and dresses. If you want something that adds volume, this one looks like a better choice.

Continued..
Experience
I think the petticoat would work well for quite a few costumes. A lot of costumes already show a model wearing a petticoat underneath so you can see it will work before you try it out. A costume that immediately comes to mind as matching with a petticoat is an Alice in Wonderland costume. If you want to accent a regular skirt, I think anything that isn’t ruffled or frilly already would look cute with a lace trim underneath it.

To care for the petticoat, you can either hand wash it in the sink or throw it in the washing machine on a gentle cycle if you have a front-loader washing machine. I recommend using some liquid fabric softener to soften the lace up a bit. The petticoat should be hung up to dry once it’s clean.

This can be stored either in the closet on the included hanger or it can be folded and put away in a drawer or storage container. I personally plan on hanging mine once I have somewhere to hang it.

This is the first petticoat I have tried. I was expecting at least a tiny bit of volume to be added to my skirts with this on underneath them. Unfortunately that didn’t happen. If I was able to sew, I would add a layer of crinoline between the lace tiers. As it is, it does add a cute lacey trim to skirts. It works well for costumes (both in the bedroom and for Halloween) and regular clothing. I think the quality is great for the price.
Follow-up commentary   I still like it 2 months after original review
As cute as this is, I haven't really used it. I wanted a petticoat to add volume, not just a red lace trim to the bottom of my skirt. I'm thinking I will try other petticoats to find one that adds volume, and then just wear this one over that for the color. I think it would work better for me that way.
This content is the opinion of the submitting contributor and is not endorsed by EdenFantasys.com