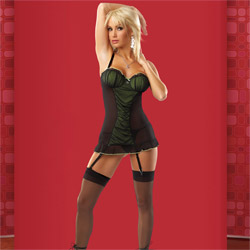 For our uses, this works great. It's form-fitting but in a good way, and it hides his stomach well. The cups have underwire and provide good support, but they only really are comfortable if you are a C cup or smaller. The mesh is breathable and extremely comfortable. A gorgeous outfit overall.
Pros:
Disguises a tummy pooch, gorgeous color, well made, mesh is breathable, very comfortable
Cons:
Hugs any rolls, doesn't support over a C cup, garters come off easily - might get lost
Rating by reviewer:
5
extremely useful review
The Gathered Mesh Chemise Set is a lingerie set from Coquette. The main colors are both a black and a green. It comes with a standard g-string that really isn't all that interesting. (Just like the plain black g-strings that come with all lingerie) The tag says it's 90% Polyester and 10% Spandex. We ordered a medium of this set. The chemise set comes in small, medium, and large. For the purpose of this review, I want to let you know that this was ordered for my crossdressing boyfriend - not me. (I wish I fit into a medium sometimes.) While it was worn by him, I can give you some good assumptions about putting it on a female.

The lingerie set came nicely folded and wrapped in a thin piece of tissue paper. It was a romantic-looking set-up, and I like it. It came with an easily-removable Coquette tag. There were no stains or wrinkles in the lingerie when it was first taken out of the box.

We purchased this set because I love the color green on him. It just looks good. I also wanted this one because he does have a bit of a tummy, so I figured it would help hide that. He is six foot tall and weighs about 150 pounds. He doesn't have much in the hip area, and most of his height is in his legs. (For you tall girls, this is great news because this outfit fit him great - even at six feet! Most outfits are usually too short)

The entire color scheme for this lingerie outfit is black/green. It's a dark forest green for the most part. The bust does have underwire underneath the cups and no padding inside of the cups. The cups are about a 3/4 cut and are intended to show off the upper portion of the breast. In between the cups there is a small green bow that's pretty adorable. Ours didn't seem to have the "lips" charm that comes with this little bow on most Coquette lingerie. Along the upper lining of the cups is a small layer of see-through mesh and a light-green (lime) thread lining. The backside has a three-setting bra clip which is extremely easy to put on. The two straps aren't removable, and they will adjust to variety of lengths to fit most everyone.

The bust portion of this is intended for relatively small-breasted women. A B cup would fit most comfortably into the cups, and A would probably be a bit small, and a C cup would find themselves over-filling the cup. Anything over a D is going to find the underwire poking into their breasts and no support, so I wouldn't recommend it. There is a thread that runs through the middle of each cup that might get a little scratchy - I can easily feel it with my finger and it feels scratchy. You can avoid that problem by adding some push-up forms to underneath your breast. (Then you get some pretty pushed-up boobies too! :) )

The body of this dress is mostly see-through mesh. There's a front panel that goes down the middle that is the green with some mesh overtop of it. The rest of the dress does have the see-through mesh though. The backside of the dress does include a large hole that runs from the bra clip all the way to the upper portion of the butt. It's meant to show off the lower back and really does it nicely. The body of the dress is pretty clingy, and it will hug the body really nicely.

The bottom portion of this outfit is just cute. The dress ends right above where the butt ends and barely covers the crotch. The bottom of the dress does include a cute little "fringe" that is also outlined in the lime green. The set includes removable garters which are really easy to remove, so be careful about not losing them. The garters themselves are relatively normal with the "ribbon" type that hides the actual garter.

I can't say too much about the g-string. It's just one of those run-of-the-mill g-strings that companies include with their lingerie. However, I can say that it does run a little small. The medium was definitely tight on his hips. The tag is on the front panel which can get a little itchy as well.

The set does appear to be relatively well-made. I wouldn't call it amazing, but when you make something out of mesh, I can't expect it to last forever. Mesh stretches, and it's very thin. However, for the material, we haven't had any problems with it. It washes easily, doesn't stain, and no threads are visible or no fraying is occurring.
Experience
For this lingerie, I'd honestly only be able to recommend this to those who are pretty skin or fit themselves. Because the material is very clingy, this will cling to any roll of fat that you do have making you feel more unattractive. (Plus, the material is see-through which would allow your "viewer" to see it as well. Not a confidence booster.) However, if you aren't dealing with fat rolls (god, that sounds so crass) and just have a small tummy, this is perfect. Because the stripe goes down the center of the stomach, it will hide your slight tummy while accentuating your hips and upper thighs. It does a great job of disguising a small tummy. However, remember that the cups really don't support anything above a C very comfortably, so keep that in mind while picking it up.

To clean this, the tag recommends hand washing it in cold water. To be honest, I'm totally lazy, so this goes in the washer. We put it in a lingerie bag and put it on delicate, and so far, we haven't had any sort of problem. The garter straps really do dry out very, very slowly, so if you have a fan, throw the set in front of the fan instead of drying it twice to avoid harming the set. For storage, we keep it up on a regular hanger up in the closet. I think the g-string was probably thrown out. I don't know if you've ever seen a guy in a g-string, but it's really not very flattering.

We bought two pieces of lingerie in the same order, and out of the two, this is the one he likes most. I think the green really goes amazingly with someone of fair skin and especially with brown hair. (Anyone with fair skin though). It hides his tummy really nicely (not like his frame has much of one.) It really is a cute set of lingerie, and he says it's extremely comfortable to lay around in. He said it isn't itchy in the slightest, (and he's a baby about that), so there isn't any itch to it. The mesh is breathable, and since there's no bottom to this piece, you could easily have sex while still wearing this. I'd recommend getting some thigh-highs to wear with this outfit since it completes "the look", but it looks just as gorgeous by itself and some high heels. Overall, a gorgeous outfit that he loves wearing, and I love looking at.
Follow-up commentary   I still like it 3 months after original review
I still like this lingerie set. It's one of my favorites to see the boyfriend in. Unfortunately, he says it isn't too amazingly comfortable to sleep in, so I don't see him in it as well much as I'd like. (He usually just sleeps in his lingerie.)

He has worn it a couple times though, and despite that, the lingerie still looks as good as new with no loose threads or tears.
This content is the opinion of the submitting contributor and is not endorsed by EdenFantasys.com