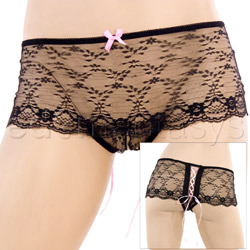 Crotchless, yes. Amazing, not really. These panties kind of lowered my opinion on Dreamgirl. A common staple such as crotchless panties shouldn't have been as terrible as these came across. Frayed laces, scratchy cheap material and almost 15 bucks a pair? C'mon, if Dreamgirl is gonna be like that, I'm sticking with Wal-Mart brand. At least at 2 bucks a pop, I can only expect so much from them.
Pros
Sexy, crotchless, gorgeous pattern, flattering color scheme.
Cons
Cheap feeling, too expensive, frayed lacings.
Rating by reviewer:
1
extremely useful review
So, I love Dreamgirl. I really do. Dreamgirl is a staple of my lingerie diet, part of my seductive dietary needs. However, when it comes to these panties it REALLY makes me wanna call quits on them. The lack of professionalism and quality is upsetting. These panties have had not one, but TWO tries.

I initially bought a pair of these panties, last year. I had opened my box and they weren't impressive to me in the least bit. They arrived in typical Dreamgirl fashion wrapped in pink paper. I gingerly touched them and it was rough and horrific to the touch. I tucked them away until my roommate and I parted ways where she probably called herself "stealing" them along with other items. (Gross, right?)

Anyways, I ordered another pair. They arrived in the exact same fashion but the quality of the panties is still just as bad. They were costly, way more costly than any other panties I'd purchase. I know I'm frugal but when something's worth it, I can recognize a good purchase when I've made one. I can also recognize a bad one when I've made one. At about 15 bucks per pair, these panties should be ridiculously hot, soft to the touch and well crafted. I know I'm paying more for vanity, but I could get seven different pairs of lacy boyshorts at Wal-Mart. They won't be crotchless, but they'll be cute and I won't mind seeing a frayed end on a pair of Wal-Mart laces.

Anyways, these crotchless panties are lacy sheer crotchless boyshorts with a floral pattern. They're available on EdenFantasys in sizes S-3x/4x and available in black or white. These are pretty basic run of the mill boyshorts with of course, an open crotch. You can wear these with basically anything: under a dress, with lingerie, with a bra and give your partner some easy access. Crotchless panties feel sexy and keep me revved up all evening, knowing how secretly exposed I am.

Boyshorts or also known as boy cut or booty shorts are a kind of women's underwear that goes all the way down the hips, named for their similarity in looks to men's knit boxer shorts. Unlike men's briefs, however, this style is usually lower cut, and is designed to fit and flatter a woman's figure. Boy shorts often cover most of the buttocks area.

I wear a size 18, my waist is 42 inches and my hips are 55 inches. Despite that, these panties have some stretch and my intention was for them to be tight and emphasize my ass, which they do. The banding on the boyshorts is a little loose and these sag somewhat in the front. Ironic considering how I don't fit into the box. I'm somewhat glad though, cause sometimes Dreamgirl runs a little small, and very true to size othertimes.

So, to care for these you should follow the tag. Handwash them and line dry them. It is time consuming but it'll keep them lasting a little longer. Also, if you have a lot of dedicates you can put them into a lingerie bag and go from there. I don't though so I simply handwash most of my sissy priss dedicates and let them air dry.
Experience
The only thing I can really say I loved, was how they were literally crotchless. I've had crotchless panties before where the slits were too small that my partner couldn't fuck me with them on. He can literally plow me with these panties on and they won't rub against his dick or anything. The only problem is, is that the lace is so scratchy against my skin I barely want to keep these on. He finds them gorgeous, I just wish I felt the same way.
This content is the opinion of the submitting contributor and is not endorsed by EdenFantasys.com

Reviewed by Illusional (Eden Advanced reviewer) There is only one happiness in life, to love and be loved
Rank
6.4
wrote 69 reviews
Comments
Make a post
Forum
Thank you for viewing Black lace up crotchless panty review page!
Top