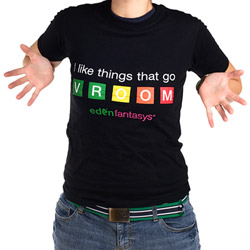 This Shirt Needs a Major Overhaul

This shirt is a minimum of two sizes smaller than it promotes itself to be and doesn't do the only job it was supposed to: fit.
Pros:
It's got a great design, supporting a great website and a great company.
Cons:
Absolutely not a 3X
Rating by reviewer:
1
extremely useful review
Before we go any further, dear reader, I want to make one thing very clear: I take my ratings very seriously. I try to see the bright side of whatever products I review, because there's a redeeming quality to almost every product, even if there's nothing redeeming for me. To the best of my knowledge, this is the very first product I have assigned a rating of 1-Star to, so I do hope you know how seriously I take that rating.


The EdenFantasys t-shirt is a regular cotton t-shirt, which functions, as most clothes do, as a way to not be naked. It is a mid-weight cotton, lighter than most regular t-shirts, but thinner than summer weight jersey cotton. Pre-shrunk, you won't have to worry about this already tiny shirt becoming any smaller (though if it got any smaller, it might disappear). The shirt is fairly stretchy, as most t-shirts are, but it doesn't have the substantial stretch of lycra. There were no care instructions included with the shirt, and it just came in a clear plastic bag, so I would recommend washing this with your dark coloured laundry, as it may 'bleed' onto lighter clothes. There is no information on the exact makeup, but my call is a cotton/poly blend. When worn, the shirt is soft and comfortable, though the collar and sleeves are a little tight; you can stretch these out, though, or cut them to make it more comfortable.

The screenprinting is... Okay. My t-shirt arrived with some kind of schmutz on it (it looked, honestly, like someone had dropped something on it) but that came out in the wash. Even so, ew? Let's not think about that, now. The rest of the screenprinting varies; the VR and first O are very cleanly done, but there's a smudge of white paint between them that didn't come out in the wash. The second O has black space around the letters where it wasn't lined up properly, and the M looks like it had been taken off the press too quickly and set down, since the white lettering on the letter itself is distorted (again, like someone took it off the press when the ink was dry, and the ink smudged off). Obviously these are all minor details, but minor details add up.

The size tag on the shirt is tiny, and is easily removed (awesome if you want to keep your actual size on the downlow, or if you're like me, and consider size tags to be the punishment from the Seventh Layer of Hell).
Experience
I ordered the 3X shirt, figuring that it would be big enough that I could wear it as a night-shirt. What I got? Not big enough for a night shirt. Not big enough for a regular shirt. Not big enough, period. This is what I got (please excuse the awful grainy photo; I will do my best to replace it with a better quality image).

Now, just for some context, I laid the shirt I got from Eden (remember, this is a 3X shirt) on top of another shirt, which is purple for contrast. This other shirt is a standard unisex XL shirt.

So this shirt is not only NOT a 3X, but it's substantially smaller than a standard XL shirt; closer to a Large.

I also checked it against a 2X women's fitted shirt: maybe they just forgot to mark it as women's? Nope. It's still small.

Reviewed by DeliciousSurprise (Eden Writer) If "no" is not an option, "yes" is not a question.
Rank
6.9
wrote 103 reviews
Comments
Make a post
Forum
Thank you for viewing EdenFantasys t-shirt – party costume review page!
Top