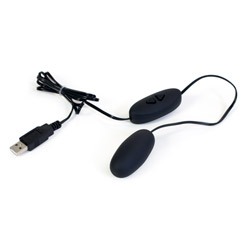 To summarize, the E-sensual bullet is a strong toy with great features that make it fantastic to use and saved me a lot of money on batteries.
Pros:
No batteries required, Powerful, Quiet
Cons:
Not versatile, Not waterproof
Rating by reviewer:
4
useful review
Being both a computer addict and a chronic masturbator, it's obvious that I would jump at the chance to review a bullet that runs not on batteries, but plugs into a USB drive. If you're like me and do most of your masturbating at the computer, this toy is seriously a must have for your arsenal of sex toys.

Unlike most plastic toys I've used, this bullet is very smooth, almost velvety instead of shiny and cheap like I expected. It can be safely used with both water and silicone-based lubes, which is great for those of us who like to use both types.

Be careful when cleaning this toy--the bullet itself is easily cleaned with mild soap and hot water, but the control pad should not be submerged in water because it will ruin your toy.

This toy is p-o-w-e-r-f-u-l. I mean, wow. And so quiet! The control pad is a simple "up-down" button pad that controls seven different vibrations settings, and I could barely use the strongest one because it felt like a jackhammer was bouncing away on my clit. Good for some, not for all, however there are much milder settings.

Back to the control pad--it's slightly confusing. There are no indicators as to which is up and down, so you need to play around with it a bit. Also, the down button turns the toy off instead of turning the level down, so scrolling through all of the settings just to go down a notch was irritating, but not so much that it ruined the toy for me.

The E-sensual bullet broke after about five months of use. Fairly long life for a bullet, but I was disappointed. It's easily one of the best toys I've used and highly recommended.
Follow-up commentary   I still like it 2 months after original review
I bought another one of this toy and it broke after just a week of use! I don't understand why this toy isn't as durable as my first one, but nonetheless, this is still a good toy, in my humble opinion.
This content is the opinion of the submitting contributor and is not endorsed by EdenFantasys.com

My E-sensual bullet tags
About author