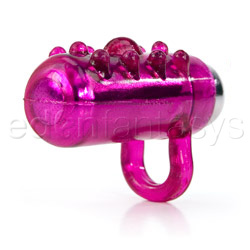 Overall it was a bit of a snooze the one time it worked and it died right after. Usually a cheap product at least works for a couple weeks before dying. This one only made it through one use.
Pros:
small, quiet, convenient
Cons:
not strong, only worked once
Rating by reviewer:
1
useful review
I desperately wanted a bullet vibrator that I could use on my clitoris during sex. Penetrative intercourse isn't usually enough to get me off and I wanted something small and unobtrusive to use for play with my partner. This candidate was cute and inexpensive, so I chose it.

In spite of the rating I gave it, it isn't all bad. The fact that it has a removable outer cover is nice; you can take that off and wash it well with soap and warm water without getting the actual bullet wet. I also found the finger loop very convenient. Its easy to hold on to during sex. Its size also makes it easy to travel with and relatively discreet.

That said, it only worked once, and that one time wasn't all that great. As I was afraid of, the vibrations were seriously lacking. They were extremely shallow and were not strong; in other words it felt the way most watch battery vibrators do. I am not someone who requires a jackhammer's intensity of vibrations to get off, and and still this little guy's single speed did nothing for me. The design was practical for during sex, but it did not provide much sensation so it defeated the purpose.

Basically, unless you're just buying it for the sleeve, you're better of saving your money for something a little more enjoyable. I personally would have rather had a few chalupas at Taco Bell.
Follow-up commentary   I still don't like it 15 months after original review
Threw this one out quite some time ago. While I've since had other troubles with bullet vibrators, none have been as disappointing as this one.
This content is the opinion of the submitting contributor and is not endorsed by EdenFantasys.com