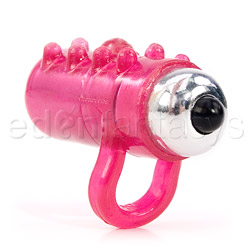 Feeling frisky? You will now!

At $5, you can't go wrong. Buy one in every color. Buy two in every color. Frisky Fingers is perfect for clit stimulation and sensory play. I'd recommend to everyone regardless of your experience level. Perfect for getting things going!
Pros
Strong vibrations, low noise level, nubbies feel amazing.
Cons
Not waterproof!
Rating by reviewer:
4
useful review
I was looking for something for more of a pinpoint on my clit, and I was having a really hard time with it. I'm not a big fan of a bullet/egg, mostly because of the wire, and the centralized stimulation doesn't do it for me. So I headed on over to EF and took a look through the smaller vibrators. That's when I found this guy.

The very first thing I thought of when I saw the Frisky Fingers was that the nubbies looked awkward. Maybe unpleasant. But it was only $4.99, and the colors were cool, so I thought to give it a try. Let me say first, the hardest decision was picking a color. I almost got them all! But finally, I picked the white one.

When I opened the package, I was relieved to not find a scent of any sort. Very tiny with those really tiny watch batteries. Easy to put together though. I was wary of putting it on my finger, however, having read that the sleeve part has ripped on more than one when trying that. I'm quite thrilled to say after several uses, the ring on mine is still intact. And the battery is a beast. It's also ridiculously quiet, so it lives up to being discreet, and for being only one speed, it's very powerful. Big shocker!

Jut so everyone's aware, the white really does glow in the dark. I was like a giddy school girl when I saw it, and did a happy dance, filled with joyful joyness. Then...I had to figure out how it worked. Obviously, it has a touch button. However, I couldn't figure out which way it went. In the end, it doesn't really matter, because it will work either way for you. I just found that having the button facing outward was easier, so I could click it off with the finger inserted through it.

So, this baby is a metal bullet, covered with a TPR Silicone sleeve. It's a silicone-rubber composite, which has a jelly-like feel but is a bit safer. However, it is still porous. Thus, you should clean it before and after every use. I realize that's kind of complicated with the sleeve being so small, but using a cleansing cloth, or a little water with mild soap/toy cleaner should do the trick. Just remember (although you won't need lube with this toy, but there are others like this), that if you need a lubricant, WATER-BASED ONLY, or use a condom. A Silicone Lubricant will DESTROY TPR.

So sadly, this toy is not waterproof. Be careful when using it, you wouldn't want to ruin this little charmer! The batteries are replaceable, so you're definitely going to get your money's worth. Truth be told, buying replacement batteries will probably be more expensive than the toy itself. You'd probably be better off buying a brand new one than trying that. Again luckily, the battery life is beastly.
Follow-up commentary   I don't like it anymore 3 months after original review
The sleeve on this little guy decided it wanted to melt and stick to EVERYTHING in its path. I did decide to save the batteries (watch batteries are so hard to find), but the rest of this has hit the trash bin.
This content is the opinion of the submitting contributor and is not endorsed by EdenFantasys.com

Become a Reviewer
My Frisky fingers tags
About author

Reviewed by M. Roth (Eden Reviewer) I don't want to fuck the keyboard, that thing is quite boring and cold. - Till Lindemann
Rank
5.3
wrote 21 reviews
This review was edited by
Comments
Make a post
Forum
Thank you for viewing Frisky fingers – finger massager review page!
Top