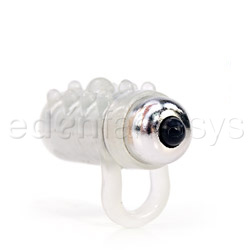 Though it's a little big, it's not cumbersome. Will provide to wearer intense pleasure! For the price, it just can't be beat.
Pros:
Intense vibes, textured sleeve, great orgasm.
Cons:
Louder than expected, a little big
Rating by reviewer:
4
useful review

The sleeve the bullet comes in is made of a silicone composite. It's very nubbly. This is a great toy for anyone trying toys for the first time or for the 100th time! When I used this, I had also just used a clitoral pump so my clit was extra sensitive. The texture added intense stimulation.

This was slightly bigger than I imagined (as I have a bad habit of not checking stats and just ordering what looks fun!), but it was still small enough to put on my finger (or hubby's finger) and enjoy the ride. The shape was a pretty standard bullet. I had purchased this with the anticipation that I could wear it on my clit in my jeans while I go grocery shopping or something, but it's a little too bulky for that. I will have to keep searching for something other than the panty sets for that (something a little more affordable, like this!).

The toy is a bullet inside of a silicone sleeve. It has a button that you use to turn it on and off. And those are the speeds: on and off. It's got really strong vibes, but it is a little loud. I don't know if it was our toy that came (because others have said that theirs was quiet), but unless my lips were closed around it and under the covers, it could easily be heard on the other side of the door. No hiding that we're using toys! This toy is not waterproof.

Since the Frisky Fingers is not waterproof, you want to remove the bullet from the sleeve to immerse in water to clean. You may want to invest in toy wipes for the bullet itself or use some mild antibacterial soap on a paper towel, along with another wet towel to rinse the soap.

It's packaged in a rather standard cardboard/molded plastic sleeve case. It looks as if it is meant to hang on a peg in a store. You would probably want to find a box to put the package in to wrap if you were to decide to gift this product, or use a gift bag.

As I've said before, I had used a pump on my clit that night, so the vibrations and the texture were almost TOO intense for me. My husband had to use it more on the hood to get me to achieve an orgasm, otherwise it simply hurt. But I know that once my clit has calmed down, this toy will be RIGHT up my alley! I'll let you know if a few months how this is working out for me!
Follow-up commentary   I don't like it anymore 1 month after original review
While this is still working on its first round of batteries and going strong, it doesn't really get a lot of play. Mostly because it is really loud, only has one speed, and is really strong. I thought at first that it was mostly due to my being oversensitive from using a clit pump, but it is way too much for me. I don't know if it is because of the nubs or the fact that I can't build up from a lower speed. I just don't enjoy it that much. It does come around if I'm already numbed from not being able to achieve an orgasm with either my husband's fingers or another toy, but that is very rare.
This content is the opinion of the submitting contributor and is not endorsed by EdenFantasys.com