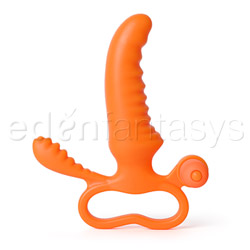 A great idea with poor execution.

This toy didn't work well for me, but others may be able to enjoy it. I was disappointed and frustrated while using this toy. If they put a hole in the base of the biggest probe for a bullet, I think it would have worked a lot better.
Pros:
Beautiful soft bright orange silicone. Ridges feel great. Bullet is powerful.
Cons:
Vibes aren't felt throughout the toy. Can be too flexible.
Rating by reviewer:
3
extremely useful review

The Shots Ripple triple stimulator is meant to stimulate your g-spot, anus, and clitoris at the same time. It is also marketed as a "unisex love toy". As for male stimulation, the girth of the toy is too intimidating for my man to use anally, so I can only guess how this would work on males. The biggest part is curved just right for prostate stimulation, so I imagine it would work nicely for that purpose. If used with the man laying on his back, the bullet should stimulate the taint and balls nicely.

As for female stimulation, I can tell you there are some pros and cons. If your anatomy lines up just right, the potential is there for some intense stimulation to three different areas, depending on your tastes. For me, this toy just missed the mark on so many different levels. First of all, the vibrations do not transfer well throughout the toy at all. The bullet is pretty strong, but is basically attached to the "handle" part, so the vibes do not travel up through the g-spot portion or the anal portion. To get stimulation of your g-spot or anus, you are going to have to thrust or rock to get pleasure, and this can be even trickier depending on your anatomy. I found that I could either have the vibes on my clit, or get pleasure from the "probes", but not both at the same time. There is a lot of flexibility to the material, so you may be able to get creative and have a lot of fun with this, especially if you have a partner to help.

The material is what made me want to get this product. I can never resist bright orange silicone! There is no smell or taste and it is not porous, so it can be sterilized. It's a soft silicone with lots of flexibility and give. While this feels better on the skin, and can add some versatility to function, it can also make it harder to apply the needed pressure to stimulate the g-spot or p-spot. This was definitely the case for me. The length of the curved g-spot probe doesn't allow for leverage to compensate for the lack of rigidity. While it felt nice to use gentle thrusting or rocking, it didn't couldn't apply enough pressure to have a g-spot orgasm. Every one is different though, so some may enjoy this toy more than others.

The probes both have ridges on them that add a nice texture without being overwhelming. Honestly if it wasn't for the ridges, I wouldn't have been able to get much pleasure from this toy at all. Total beginners or people who are more sensitive to textures, may find the ridges too much. However, the material is so soft, that I don't think this will be the case. If you are wanting to experiment with texture, this might be a good place to start.

Originally, I thought the design was going to be perfect. The ridges and the curve looked perfect for my g-spot and the little anal probe looked promising. To feel vibrations on those spots as well as my clit at the same time would have felt great. Sadly, this isn't the type of experience I had. While the probes are sized and shaped perfectly to give pleasure to the areas they are meant for, the bullet is attached in such a way that the vibes aren't felt anywhere but in the bullet. Also, if your anatomy doesn't line up, you will not be able to enjoy the probes and the bullet at the same time. Just holding it in place, everything pretty much lined up, but with out the vibes going through the entire toy, only your clit is going to get the stimulation. To get any stimulation from the probes, you have to rock or thrust and that just moved the bullet away from my clit.

The plastic bullet that comes with this is pretty powerful and it has 10 different settings, which is amazing for a bullet of this type. It's waterproof, and that's always a plus. That being said, it has a lot of downsides. First, it's kind of loud. Most bullets I have like this are relatively quiet, not so much with this one. It sounds more rattly and high pitched than the others I have. Also, the ten settings, while great because of the variety, make it frustrating somewhat when you have to turn it off. There is only one push button to operate it and you have to cycle through all of the settings to get it back off. Also, the button is very sensitive, so if you hit it accidentally, you have ten settings to cycle through to turn it back off. This is even more annoying if you hit it during play, as you have to cycle through to get back to the setting you were enjoying.

The bullet comes with the three watch batteries it takes to operate it, which is nice. I just have to say though, I HATE watch batteries. Not only are they expensive, but they are a bitch to put in and take out. I like to take my batteries out between play sessions, but when watch batteries are involved I leave them in because I hate dealing with it. Also, I can't really comment on how long the batteries last in this particular toy because when I took this toy out to do my review, it didn't work. I had only used this twice and for only 10 to 15 minutes each time. I tried taking them out, putting them back in and screwing the top on and off a few times to make sure I had it on right. It wouldn't turn on, so I got some brand new batteries. To my surprise, it worked. I was surprised because I was so sure the bullet had broken. I didn't think it could have been the batteries being dead so soon, but they were. I am afraid though that maybe it got turned on somehow accidentally and just ran the batteries out. The button is that sensitive, but I thought for sure I would have heard it. So who knows. I'm not about to waste any more batteries trying to figure out how long it will run, so I apologize. If I decide to play with this toy some more, I will let you know in my follow up review how the batteries hold up.

Silicone is non porous and easy to clean. Whether a light cleaning with toy cleaner or a more deep cleaning with boiling, you can get this baby clean easily. I use liquid antibacterial hand soap and hot water. This type of silicone does tend to attract lint, dust, and hair easily though. I make sure it is dry and I store it in a plastic zip top bag. This helps keep the lint and dust away and also keeps the silicone from reacting to my other toys. Also, as with most silicone, only water based lubes are recommended.

I had the hardest time getting an orgasm for this toy. The bullet by itself, will get the job done, but the sensitive button and cycling through all of the settings got annoying pretty quick. I was able to come by alternating the clit stimulation with rocking and thrusting, but it was just awkward and too much work for me. My partner was able to help me, and that made it easier, but still it just took too much time. We don't have much free time these days, so maybe when we get a night to ourselves, I'll try this toy again. The material and the texture is really nice. If you don't try to get all three spots stimulated at once, you will have a better time, but then what's the point of a triple stimulator? I guess it's more convenient than having three separate toys out. However, I would rather go through the trouble of getting three toys out and getting a satisfying experience with them, than working so hard to make this one toy work for me.
Follow-up commentary   I still don't like it 2 months after original review
Okay, so I have tried and tried and tried. This toy is just too damned annoying for me. The bullet gets on my nerves with the settings and it eats watch batteries. The silicone part itself can be nice, but mostly with my partner. He can use the flexibility of the toy to hit all three spots(after we replaced the bullet with a better one), but it's mostly a tease for me. It doesn't hit either one of the spots particularly well, so I end up getting other toys out to finish or just having sex. It can be a good warm up toy for us, but to be honest I have toys that hit those spots so much better. Honestly, in the case of the "anal" stem, even a finger feels better.

If you have the patience or the perfect anatomy, solo play with this toy might be worth it just based on the fact that it's hard to stimulate three spots on your own. For those new to toys, they might like the novelty of having three places stimulated at once, especially if your current toy collection is lacking. There is definitely a need for sex toys that stimulate all three areas at once. I wanted one so bad, and to have it in such beautiful colors and body safe silicone? I was overjoyed! That was until I tried to use it and it didn't work out the way I had hoped. I think others will be just as disappointed, even more so if they actually have to pay for this thing. I would have returned it had I actually paid for it.
This product was provided free of charge to the reviewer. This review is in compliance with the FTC guidelines.