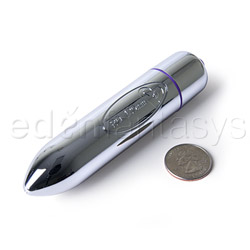 Bullet
by Rocks Off Limited

A Little Bigger, A Little Better.

Overall the RO-120mm is a fairly decent toy, but as a man it's just not the right sort of thing for me. As much as I get enjoyment from playing around with vibrators I just need something stronger and rumbly to really get me off this way.
Pros
-Well built
-Waterproof
-Multiple settings
Cons
-Buzzy vibrations
-Faux-metal appearance
Rating by reviewer:
3
extremely useful review
The RO-120mm is a medium-sized vibrator from the Rocks Off range but it's still nice and compact. It measures in at 4 3/4" long and has a 3 3/3" circumference, so it's considerably larger than the RO-80mm bullet, but a little smaller than the RO-160mm.

The bullet is powered by 2 AAA batteries and has three different speeds along with two patterns of vibrations to choose from. The first pattern is a rapid sequence of pulses, and the second is a slower one. The bullet is operated by pushing the button on the base once to turn it on, again to change the function, and by holding it down for a couple of seconds to switch it off. There's no way to lock the button, so if you're going to travel with the toy then remove the batteries first to prevent accidental activation inside your luggage.

The motor of the RO-120mm appears to be located around the tip, and the vibrations can be felt most strongly in the bottom third of the toy, lessening as you move towards the opposite end. The vibrations definitely appear to be more focussed than what I experienced in the RO-160mm, though not to the same degree as in the RO-140mm. When you first switch the toy on in your hands it feels quite intense, but unfortunately the vibrations from the RO-120mm are of a very shallow buzzy nature which I'm just not a big fan of. Running the vibrator all over the most sensitive parts of the penis proved to be very unsatisfying, much in the same way that I experienced with the RO-160mm. No matter how long I attempted to play around with this toy I don't think it could ever bring me to climax; the vibrations feel vaguely nice and stimulating up to a point, and then it just stops, and there simply isn't enough there to push me over the edge. This is in contrast to the RO-140mm which I found was quite capable of doing this. I found that the 2 patterns available on the RO-120mm didn't help with this in any way either and only decreased any pleasure I was feeling. Despite being constructed in the same way as the RO-80mm I found that I didn't experience any discomfort from the tip of the RO-120mm when using it, presumably because it's less pointed. I found that the slight remnant from the moulding process at the tip didn't have a negative, or even a noticeable, impact.

Even though the RO-120mm can be used anally in conjunction with one of the Mini-Mates sleeves, I certainly wouldn't attempt this with the vibrator alone. The distance from the tip to the battery cap is only 3 3/8" long, so it's not a great deal to insert, and when you consider how slippery the shiny surface will become when covered in lube, and the lack of flared base, it's really not a risk you want to be taking.
Experience
One positive about the RO-120mm though is that it's actually quite quiet, and I would feel comfortable using it while someone was in an adjacent room, as it's unlikely that they could hear it. It is noisier though if you're using it alone as compared with when it's inside one of the Mini-Mates sleeves.

The entire toy is completely waterproof, hence it's safe to use it in the bath or shower. It’s only waterproof when the battery compartment is screwed on completely though, and handily both the cap and main body have markings on them, so you can be safe in the knowledge that once they’re aligned everything is screwed down sufficiently tightly. The other benefit is when it comes to cleaning it as you can get it as wet at you like under the tap or in the sink. You can wash it with anti-bacterial soap and hot water, toy cleaner/wipes, or a quick rub down with a 10% bleach solution.

The RO-120mm comes in the standard Rocks Off packaging that you might expect. The box is made from a sturdy black cardboard and features a hinged lid with a clear-plastic viewing window. The toy itself clips into a plastic tray inside the box which is adorned with the company logo, and altogether it provides a nice place to store the toy and keep it away from unwanted dust.
This content is the opinion of the submitting contributor and is not endorsed by EdenFantasys.com