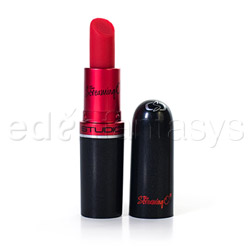 A Racy Shade of Red

The Screaming O Studio Collection Vibrating Lipstick is very discreet and chic, perfect for an evening out. Looking like a regular tube of lipstick this is great for foreplay or solo play in public or in private. The tip is made of soft, flexible silicone and is 1 3/4" long. It's just the thing to tease and please when you're out on that sexy date night.

It is also waterproof, so you can use it in the shower. We did not try to submerge this toy, so I can't say if it would be good underwater, but it held up well in shower tests.

The only real problem that we have with this toy is the volume level. For a discreet vibrator, this is a little louder than we'd like for it to be. I know that when you have more power the noise level is going to increase, but this is noticeable. We have tried to use this toy in several places and found that places with a higher ambient noise level were best suited for use. In a nightclub no one could hear the sound, but if we were to try and use this at dinner it would be noticeable to people at surrounding tables. We use this in the car quite a bit, with my wife in the passenger seat and I can hear a distinct buzzing while in the driver's seat. I give this 3 out of 5 on the Bee scale.

This is a very easy item to care for. With it being waterproof it would be easy to clean this with soap and warm/hot water. You can also use a toy cleaner or anti-bacterial wipes with no problems. Since this has a motor, it cannot be placed in the dishwasher or boiled to disinfect.

Storage is very easy, especially since this is so small and discreet. We store this in a small box on my wife's dresser, you could also store this in a toy drawer, or in its original packaging if you chose to do so.

This could be given as a gift, but only to a good friend. Giving this gift at a large gathering might be a little uncomfortable, but overall the packaging is well done.