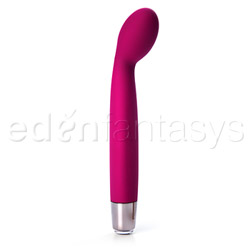 Ah, another toy that's ruined by a weak motor...

The Zenith is made out of plastic, with a PU coating. PU coated plastic rates as a 7 on Eden's safety scale, and it is phthalates free.

The matte plastic on this toy feels silky and soft to the touch, so it's not quite as slippery as some of the shinier types of plastic. That being said, this toy doesn't really have any drag to it, either. If you prefer your toys to be a bit more slippery, you could add silicone- or water-based lubricant.

This toy has no flex or give to it at all; the plastic is completely firm. This toy also has no texture to it at all.

The battery cap is also made of plastic, but it is a shiny, metallic-looking plastic.

This toy doesn't have any odor to it at all. It does, however, have an unpleasant plastic-y taste to it, but that should kind of a given.

This toy is simple, and yet elegant in design. The shaft is thin, long, and straight, but then it has an egg-shaped head to it. The egg-shaped head has a curve to it, allowing it to provide g-spot stimulation. Also, the shaft of this toy seems to have a sort of triangular shape to it, without all of the sharp points. The shape does make it very easy to hold onto.

Zenith runs on two AA batteries, which are easy enough to insert. You simply twist the battery cap on, push the batteries in (and yes, you do kind of have to push them in, not just slide them), and then twist the cap back on. Unfortunately, removing the batteries is not that easy. The first battery comes out easily enough, but I find that I have a great deal of trouble getting the second one out. The battery compartment is just way too tight; it's taken me literally 30 minutes to get the battery out... which kind of makes this toy just not worth the hassle.

The controls on this toy should be simple... it's just one push button. The trouble is, sometimes I go to turn this toy on and it won't work. You're supposed to press and hold the button for a few seconds for it to go on, but there are times that it won't go on at all, even with fresh batteries. Anyway, once I do get the toy on, the controls work well.

The vibration patterns are rumbly, but they're not very strong. I'd say they're about a 2 1/2 on the highest setting, which is nowhere near strong enough for me. On the plus side, however, this toy is very quiet.

There are seven vibration patterns, however. The first three are steady, consistent vibration speeds. As I said, none of them are very strong at all. The other settings are patterns, and they include pulsating at various speeds, and escalating.

To turn this toy off, you simply hold the button for a few seconds.

Also, just as a note, this toy is not waterproof, but it is splashproof.

This toy is made out of plastic, which means that you can use both water-based and silicone-based lubricants with it. There's no need to worry about the toy being ruined by your lube of choice.

Okay, so, now you've played, you've had a good time (maybe -- if this one works for you... it didn't work for me), and you're ready to clean up. When you clean this toy, you want to remember that it's not waterproof. It does have a little o-ring in place, but it's still only considered splashproof. This basically means that you're not going to want to submerge it under water. So, when you clean this, you're not going to want to soak it in water for awhile. Instead, I'd simply wipe it down with a wipe or toy cleaner. Or, if you like, use antibacterial soap and water -- just take care of the battery compartment.

In regards to storage, I simply recommend taking the batteries out (which is a huge hassle). The toy does come with a very nice storage pouch, but this toy could easily just be set in your toy box without it. You don't need to worry about this toy having bad reactions to/with your toys.
This product was provided at a discounted price in exchange for an unbiased review. This review is in compliance with the FTC guidelines.