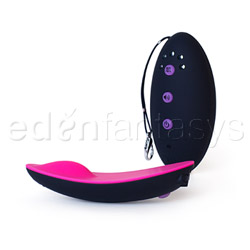 Another "One Size Fits 5% of the World's Population" Thong

Club Vibe 2.OH is a discreet panty vibe. Used with the included thong panty, it can be worn while out to provide stimulation to the labia and clitoris. The included discreet controller allows you to adjust the vibrations to your preferences without making it look obvious. The remote looks like it could be mistaken for something like a health monitor or key chain finder.

Neither the vibrator itself nor the remote are waterproof, so this toy cannot be taken into the shower. It is great to use anywhere else, from around the house to out dancing at a club. Since the remote is wireless and works up to 15-20 feet away, you can hold onto the remote yourself or give it to a partner to control. A built in microphone in Club Vibe 2.OH will use sounds of people or music around you to alter the vibrations to match the patterns of surrounding noise. OhMiBod also offers an app for the iPhone that allows you to use your iPhone to control Club Vibe 2.OH and save vibration settings. Information on that can be found here.

Since this toy does not offer super strong direct stimulation, and because of the body-friendly materials used to make it, I think all users will enjoy this.

The thong is made mainly out of black lace. The lace is soft against skin and doesn't feel itchy. Unfortunately, it does not offer much stretch, so the panty is not really a one-size-fits-most piece as the manufacturer claims. I will get more into the size/fit of this in the Design/Shape/Size section. The thong does feature a good, thick cotton liner that offers a good amount of coverage. The liner is very soft feeling. The quality of this thong is good. There aren't any loose threads, or frayed edges, however some of the lace has lost its elasticity after two uses. There are tiny elastic strands hanging off of it in some places.

For the rest of this section, I am going to describe each piece a bit more in-depth.

The final button, right under the rounded lights, powers the static vibration mode. There are five vibrating functions, however the remote does not light up to correspond with your selection.

Finally, there's the thong. This piece is supposed to be one-size-fits-most, however it is not. Right out of the box, it measures pretty well against some size 6 (medium) underwear. Unfortunately, after I washed it, it shrank down so that it measures perfectly against size 5 (small) underwear. Unstretched, it measures 26 inches around the top band. Stretched to it's max, it measures 38 inches around. This is honestly not very much of a variety to fit most users. Users who normally wear a small or are on the smaller side of medium should be able to fit into the panty, though it depends mainly on hips. I personally wear size small and measure about 35 inches around where the top band sits and found the lace rolled around itself and was tight enough to not be too comfortable. If you measure more than 37 inches around where your top band of your underwear sits, these are not going to fit.

This isn't one of those super cheap thongs that has just a thin piece of material running along the back with a tiny triangle of fabric in the front. The bands measure 2 inches wide and the bottom of the thong measures 2 1/2 inches at its smallest, which is where the liner ends. The front offers almost as much coverage as a bikini cut panty.

Once it's connected, press either the top button to select from the pre-programmed vibrating functions or press the middle button to choose the ambient Club setting. Pressing the power button will reset your selection.

I like all of the settings. None of them are super powerful, though they do seem to be about average with all of the vibrators I have tried. They are strong enough to provide stimulation, though since that stimulation is not direct, it may not send all users over the edge.

This toy is pretty quiet. It doesn't rattle around like some toys, which helps it a lot. As you increase the vibrations, the sound will not increase. Someone standing next to you in a quiet room will hear it, however someone standing near you in a club or something will not. Covers can definitely mute the amount of noise it makes.

Caring for this toy can be pretty simple. You don't want to completely submerge it in water since it is not water proof. It can be wiped down with a wipe or you can use your favorite toy cleaner on it. I spray it with some toy cleaner and wipe it off.

The panty is pretty sturdy, so it should be okay to throw in the washing machine. There aren't any included instructions for it. Mine has gone through the wash a few times and has come out okay. We have a front load washer, which may be more gentle on it than top loading washers, so you may want to use the gentle cycle if you have a top loading washer. It can either be put in the dryer or hung out to dry. I prefer to throw it in the dryer so I don't have underwear hanging up all over the place for my parents to see.

This kit comes packaged in a small cardboard box. The top shows a girl wearing I'm guessing some sort of club wear dress. The top of the box is very snug against the bottom, so it's a bit difficult to slide out. I end up having to hold onto the top and shake the whole thing just to get a little give with the bottom.