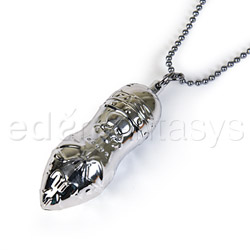 So unless you are sensitive to light touches and vibrations, I would not suggest getting this toy. If you do, be careful with the pointy tip. It hurts a little bit when you press down on it lightly. Be careful while wearing it as a necklace. It might bump against your bra and turn on randomly, and having to cycle through all those settings to turn it off can be embarrassing.
Pros:
Relatively quiet
Cute design
Cons:
Battery guzzler
Turns on when bumped
Weak vibrations
Rating by reviewer:
2
useful review

I was not happy at all with this toy. The vibrations were weak and scattered, the pointed end actually hurt, and it felt like crap. While it did get me very slightly bothered, the battery died before anything happened and I had to go back to another toy to get the job done. The chain got in the way, but when I took it off, I had a hard time holding on to the pendant while in use.

While being worn as a necklace, the pendant kept bumping against my bra and turning on. Not exactly a good thing when in a crowd or when, suddenly, your grandmother shows up at your house and hugs you and accidentally turns it on! (Actually happened. Very awkward conversation!)

I do admit that it looks cute and, if it didn't turn on with almost every bump, I might have been willing to keep it for the necklace aspect.

The pendant is made of plastic, non-porous, and hypo-allergic. Once out of the packaging, there was no detectable smell.

While the designs are cute, I couldn't feel them while in use. That might just be me, though.

The design and shape of the pendant was cute. It did look like a necklace. My mother saw it and she even commented on how cute it was without knowing its true use. It's small enough to fit in your palm, but was hard to hold on to without the chain while in use.

As I said, my own mother saw it when I was holding it and she had no clue it was a vibe. Someone that is vibe savvy might know what it is, but most people think it's just a necklace.

While no one, at a glance, would know that this is a vibe, if/when it bumps against something and turns on, everyone knows what it is. So that doesn't help with discretion. I tried it out as a necklace one day, and as I walked it kept turning on by bumping into my bra or if someone gave me a hug. This makes me think that if it were packed away in a suitcase while on travel, it would turn on at some point after a bump and vibrate the whole trip.

The performance of this toy was disappointing. While it does have many settings, some of which have patterns, most of those settings are weak and do nothing. The best settings were the last two, in my opinion. The last two have deeper vibrations then the rest.

The vibrations are dispersed along the whole pendant, and along the chain if you keep it on during use. It made my fingers numb halfway through usage.

The button to switch through settings is also the on/off switch. This means you have to cycle through every setting before being able to turn it off.

The noise level was somewhat high. I turned it on and left it on my bed and closed the door. I could hear it on the stairs and, if I concentrated, I could hear it downstairs. But with the TV on or someone walking around doing things, you can't hear it. Because of that, I think it wouldn't be heard.

This is an easy storage toy. It's small enough that it can be stored anywhere if you decide to not wear it as a necklace. Care is a bit harder because of the ridges and designs on the pendant, but some soap and water should clean it right up for you.

Personally, I did not like this toy. It was too weak for me and didn't last long enough.
This content is the opinion of the submitting contributor and is not endorsed by EdenFantasys.com