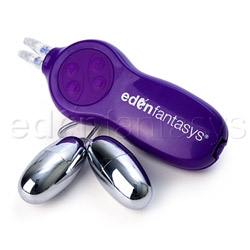 Awesome Bullets for a Good Price

I love these bullets and so does the hubby. We really can't get enough of them! We've used them everyday since we got them and I don't expect us to be slowing down anytime soon. Even though I got this toy for free, I would gladly pay full price for another pair.
Pros
Strong vibrations, bullets are fairly large, two for sharing
Cons
Buttons are too sensitive, wires could be longer
Rating by reviewer:
5
extremely useful review
These bullets are amazing! I got them free by signing up for the EdenFantasys newsletter, and paid for the shipping with EdenPoints. The bullets were much bigger than I, or my husband, expected. They are more like small eggs than bullets, big enough to satisfy both of us. They can be used anally or vaginally, or for stimulation anywhere really. You can even share them with someone else, since there are two bullets and the wires are long enough for such a thing. Although, you have to watch out not to unplug them by accident. The buttons are also very sensitive, and it's easy to bump them during sex and change the settings, or turn them off completely.

The design is fairly simple. The remote is made of a smooth purple plastic, with an EdenFantasys logo printed on the top in white. The buttons are also purple, and they are rather soft and rubbery. The bullets are made out of some kind of hard plastic. Their metal coating is smooth and cool, and though there is a seam in the middle of them, it isn't very noticeable. The toy is also fairly odorless, I didn't notice any smell when I opened the package and I don't now after a few cleanings, either. Because of its size, it is easily hidden or stored away.

The controls are a bit lacking, but they're straight-forward and easy to use. There are four buttons, a pair for each bullet. The first button in each pair is the "stop" button, while the second button turns the bullet on and then is used to shuffle through the seven vibration settings.

Though the first vibration is the lowest, it's by no means weak. Some settings I like more than others, but all-in-all I'm happy with all seven settings.

I would say they're low-maintenance as far as cleaning goes. All I do is wipe them off after use with a cleaning wipe, or I use soap and water.
Follow-up commentary   I don't like it anymore 2 months after original review
After only a few more uses, one of the bullets just stopped working! We believe it is the wire. Regardless, this toy has become useless now, as it is no longer "dual" and one of the bullets isn't enough to satisfy either of us.
This content is the opinion of the submitting contributor and is not endorsed by EdenFantasys.com