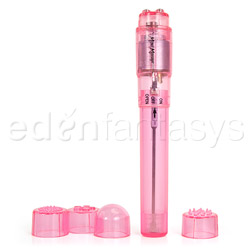 This toy is quiet, lasts for a long time, and can stimulate exactly where you want it. It also comes with several attachments for different kinds of stimulation. But there are a lot of problems due to the cheap nature of the toy that make it almost not worth buying.
Pros:
Easy to use and stimulates anywhere
Price and battery life
Attachments
Cons:
Cheaply/Shoddily made
Attachments don't quite fit
Motor is cheap and gets hot and smells bad
Rating by reviewer:
3
useful review
Great:
I wish this weren't so cheap, because it's great. The toy is regular hard plastic, which I know not everyone likes, but it does the trick for me. It's waterproof and it doesn't have any annoying grooves on it except for at the very end of the handle, so it's super easy to clean. I like this toy the most because it gives me full control over exactly where I want stimulation and that might be one of the most important things about a toy to me. Plus, I love the variety of attachments, even though I've found my favorite one and I pretty much only use that one. (It's the round one) It doesn't guzzle battery power either, so it's good to use for a decent amount of time. It's also not super loud, even at a full power.

Why it's cheap:
From the instant I got the toy, I knew it was low quality and thought I might hate it. I know plastic isn't necessarily a bad material for toys, but that fact alone caused me to instantly think it was cheap. When I examined it, I could see the motor inside covered in a tacky and noticeable film of plastic. The toy only has one vibrating strength or function and that's "ON" and you achieve that by locking the battery cover in place all the way. So if you were to switch the toy to off the bottom wouldn't be screwed on all the way. Also, when I got it, the toy had what looks like wear on the inside of the plastic near the top of the motor. It didn't look defective and works alright, so I didn't see it as a problem. The attachments don't come on and off as easily as they probably should. It looks like there are grooves on the outside of the toy and the inside of the toy to line up so that it fits correctly, but those don't help much at all. The attachments are difficult to put on and even more difficult to get off. And when they're on, that seal isn't really airtight. (be warned) The one that I actually use started to show wear pretty early on in the form of cracks. But my absolute least favorite thing about this toy is the hot metal smell. The motor does get hot maybe a little quicker than I think it should, but it never seems to overheat or work less because of that. Since the first time I used it, there has been this disgusting hot metal smell coming from the inside of the toy when I open it. I can't smell it from the outside or when I'm using the toy, but it still bothers me, especially because I worry about the health of the toy.

So, overall, I'd say that this is a great toy for someone with not a lot of money or looking for an in-between-toys-toy or a first pocket vibe. But by ALL means, if you can afford something even slightly more expensive with as good or better reviews, then get something else.
Follow-up commentary   I still don't like it 2 months after original review
It will get the job done but it isn't really worth it. The plastic is cheap, and I don't know why I never realized it before, but it's really LOUD. The worst part about mine is that I like to use rechargable batteries and those are slightly larger than the alkaline batteries of the same size (it's such a small difference you can hardly tell from looking and it doesn't make much difference with most toys), and one of my batteries got stuck in the bottom of the toy. I don't think there's a way to get it out without breaking the plastic (which will be difficult to do). It's been this way for a while. I think I'm throwing this one out, because it will be unusable to me whether I get the battery out or not.
This content is the opinion of the submitting contributor and is not endorsed by EdenFantasys.com