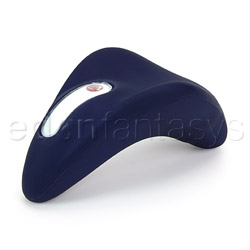 Other Better than chocolate reviews

It's elegant and geeky, with flowing lines and a futuristic look.

It's ergonomic, fitting into the palm of your hand like it was made to be there.

It's powerful, quiet, waterproof up to 1 M and unbelieveably innovative.

Vibrations are strong and diffuse but not amazingly strong. Because they are not pinpoint this is probably a good toy for those who don't need a power tool like the Hitachi to orgasm.

This Nomi Tang toy is created from thermoplastic elastomer and polycarbonate. The product guide that accompanies it states that the material is skin-friendly and used in many medical applications.

It feels unlike anything I've ever used before. The texture is beyond velvety to the point of being almost as soft as microfiber when you rub your finger along it. The interior is solid, with no give or flex of any kind -- similar to the laya spot or lily -- but the outer coating is purely luxurious.

It has no smell that I can detect nor does it have a taste of any sort. It's very similar to silicone only a bit more matte, a bit more velvety, with a bit more friction and drag while in use.

If you like very slick toys like metal, glass and plastic, you might not like the texture of this one. However it has no bumps or ridges so the only texture you're going to get is from the material itself and the lines and curves of the toy.

The top of the toy, where the control is located, dips down so that the sides almost seem to wing out and up. It allows your middle fingers to rest inside this hollow, your pinky and index fingers along the outer edge for amazingly ergonomic comfort.

The Better than Chocolate is about the size of my hand across so it rests exceptionally well inside it. It's not a large toy but it is larger than some of the other toys designed similarly. It's very close in size to the laya spot.

Tucking it away discreetly is easy as it comes with a velvet drawstring bag and the batteries can be removed to prevent it from turning itself on.
Even if you left it laying out, however, it looks amazingly like a mouse, game controller or other such technical and geeky device and I doubt anyone would even look twice at it -- other than to maybe want a new mouse like yours!

The Better than Chocolate really shines when it comes to it's control pad.

Batteries -- it takes two AAA -- are inserted by unscrewing one end. They insert one up, one down and the cap screws back on securely. There is an uber o-ring (it almost looks like an o-ring sleeve) to keep it water proof up to 1 meter.

The pleasure point is at the other end where the toy gently rounds -- though vibrations truly do diffuse throughout the entire toy and I didn't notice a major difference in their level at the point versus across the entire surface.

At the top of the toy is the amazing part; the touch sensor control pad.
It looks like a futuristic scroll wheel only it doesn't actually turn -- you simply glide your finger over it to increase or decrease the vibrations. One side of the touch sensor has a red "NT" logo on it, the rest is a solid gray color. To switch from continuous vibration to different patterns, you simply press your finger to and hold the area with the Nomi Tang logo for two seconds. The vibrator then starts a pulsation pattern that can, again, be adjusted in strength by gliding your finger over the touch pad. Hold the logo for another two seconds and you get another pattern, slightly different than the first, again adjustable.

When you find a vibration level you like - either steady or one of the patterns - you can hold your finger for two seconds over the opposite side of the touch sensor and it will lock that level and pattern until you hold it for two seconds to unlock.

The lock function also goes into effect automatically if you submerge the Better than Chocolate in water. It will keep operating but you cannot change the vibration until you remove it from the water and dry it off. (You can, of course, just turn it off to stop vibrations)

I've tested the toy repeatedly in water and it's held up as amazingly as theh Form 6.

Nomi Tang's Better than Chocolate is so quiet it would sound no louder to anyone hearing it than a cell phone on vibrate -- although cell phones don't continue to vibrate for half an hour. The point is it's very discreet in noise level as well as looks.

The product guide that comes with the Better than Chocolate suggests washing it with soap and warm water. Toy cleaner can be used, as can wipes, but I cannot recommend bleach or alcohol without more information from the manufacturer. Boiling and dishwashing are, of course, not recommended for toys with a motor.

The wonderful thing about TPE is that it feels much like silicone in this form but can be used with either silicone or water based lubes. Unlike silicone, however, it can't be sterilized so use a condom if you plan to share. A condom does fit over the toy but it's awkward and lessens the wonderful sensations from the texture so I'd suggest being selfish with this one.

I really, really, reallyreallyreally love this toy. It feels good in my hand. The controls are amazing (if a little finicky if you slide your finger over them when you don't mean to but this is where the lock function comes in handy). The shape is innovative and so body friendly it continues to amaze me with each use. Vibrations are strong and deep. The waterproof function works perfectly.

Pictures (two pages of them) can be found over on my Tumblr blog.

SaSi
$149.99
Follow-up commentary   I don't like it anymore 2 months after original review
Ahh. The chocolate.

It's still innovative. It's still a nifty texture with a nifty control pad. It's still a good shape, a fantastic design. It's still sits in it's nice gift box packaging. It still one of the niftiest toys I've seen, primarily due to the touch pad sensor thingy.

I still love it.

And yet I just can't get off with it without feeling frustrated. I don't know if the vibes are too diffuse or too on the surface or too deep or too weak or if my clit is broken (well, okay, I know my clit isn't broken) but it's a struggle, every time I use it, to get off with it. And it's not different enough, like the Sassi or the Sqweel, to feel good using it for foreplay and switching to something else to get off.

While I love it for being so cool.

I just don't like it any more for me.

Boo.
This product was provided free of charge to the reviewer. This review is in compliance with the FTC guidelines.