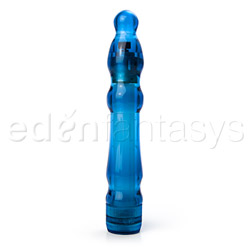 You could even use this toy on other body parts beyond the vagina, however I didn't have the greatest time with that since the body shape is a bit awkward for that type of use.

The toy is made of non-porous and hypo-allergenic ABS plastic that is smooth and transparent which makes vaginal insertion easy, and personally a better choice compared to toys that are more velvety feeling. Upon opening the toy, I noticed a slight factory/chemical smell that quickly went away after a wipe down with some Pjur med clean wipes.

I've never tasted the toy so I'm not quite sure if there is or not, but I really don't think it matters anyway.
Near the top of the toy, there are graduated bulbous flares that add some extra stimulation during penetration which I found amazing and makes me love this toy all the more.

This toy is a little over 6" long with an insertable length of 5 & 1/2 and a width of 1" and 3" over the bulbous bumps. I've always found the vibrators I've tried in the past to be a bit too girthy for me, but surprisingly this one was not and went in with ease. The toy has three graduated bumpy ridges near the top which feel amazing when the toy is thrust in and out. This added stimulation paired with the vibrations make for a spectacular orgasm.

The only thing I found wrong with this toy is that the design doesn't really allow you a great pinpoint vibration for clitoral stimulation. Yes the vibes come from the top, but they don't carry that strong enough near the tip to really target it that well. Instead, I found myself having to lay it flat and in a rubbing motion to get off that way.

The size of this toy is non-threatening and not intimidating whatsoever making it a great choice for any beginner. However it may be a bit too plain for advanced users.

Now because this toy isn't that big, it's easy to hide. I don't live alone unfortunately, and so this is a plus. I myself found it easy to hide in a sock drawer even with no fear. This toy isn't exactly discreet, but I would definitely find it okay to travel with. Just tuck it neatly inside some clothes and you'll be fine.

The Turbo glider is powered with 2 AA batteries that are inserted in the base. Just simply unscrew the cap at the bottom and slip them in, screw back on the cap and you're ready. I'd like to note that the designers of this toy were brilliant with the cap. The top portion of the cap will screw and lock on after putting in the batteries, and then the dial located on the bottom portion is the dial for the vibrations. To turn the toy on, simply twist the dial. Vibrations will gradually increase or decrease by a simple twist.

The toy is made of a transparent plastic allowing you to see the inner working of the toy, including the battery compartment and the vibrator motor itself. The motor is located near the top and just wow. The vibrations are very strong and very loud. This toy is a noisy little bugger. For that reason, it's probably not ideal to use if others are in the house. I found it loud even muffled under covers. It's probably best to use when no one is home, or in the shower where the water will drown out the noise. And in water it works phenomenally. Just be sure not to drop it! So far I've been using the same batteries for a week and they haven't shown any signs of losing power.

This toy is incredibly easy to clean. Before and after each use, I just wipe it down very thoroughly with Pjur med clean wipes. Really any toy cleaner, sprays or wipes will work. Or even just some anti-bacterial soap and water. After each use, I store it in my sock drawer in a container designated for my toys. I've never had any problem with storing it with any of my others. So it's definitely safe with other toy materials. For lubes, I use Pink Water. It's water based and I've had no problems. A silicone based lube is also fine.

This toy arrived in a simple little plastic bag labeled with the EdenFantasys logo. Nothing else. It's probably because it was a free toy as a gift for the New Year. I'd imagine it would arrive otherwise in a plastic clam shell packaging. It really didn't matter to me all that much. It arrived safely. No damage or flaws. I probably wouldnt have given it in gift form in the way it was sent to me however if in another packaging it would be fine. Storage I would opt for a toy box or another toy storage area.

Lucid dream 28
$22.99
Follow-up commentary   I still like it 19 days after original review
This is still one of my favorite vibes. The G-spot stimulation is to die for; and, even though I've accumulated more toys since purchasing this one, it's still my go-to toy.
This content is the opinion of the submitting contributor and is not endorsed by EdenFantasys.com