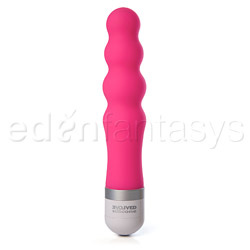 The insert-able portion of the bliss is made out of smooth hot pink silicone. I own many pink toys as I have a preference for the color pink, but I have never encountered a pink this bright in a sex toy. The pictures do not do the color of this vibrator justice. The Bliss looks quite pink in it's pictures, but in person it's almost borderline neon. It has easily become the most vibrantly colored toy I own. The Bliss is also available in purple, and after witnessing how striking the coloring was of the pink one I would love to see how the purple looks in person.

The Bliss has barely any smell at all, and no distinguishable taste. If you're intent on finding an odor and you happen to stick your nose right against it you will notice a slight chemical like smell. Besides that the smell is not noticeable at all, and becomes even less apparent after multiple uses.

The Bliss has a silky smooth texture which is very appealing to the touch. It is squishy to an extent, but it also retains it's shape. The silicone portion of the vibrator is flexible from the top three nobs and up. This top area of the vibe can be bent into almost a 45 degree angle before placing too much pressure on the material. After flexing the top of the vibe it returns to it's original shape, but if you bend it at the bottom of one of the two middle nobs you can give it a slight tilt in whatever direction you may please.

The material provides quite a bit of resistance when being thrust. This resistance causes a little bit of a cling or drag as it moves back and forth, but if you have an issue with this it can be combated with a little lube which makes it less noticeable.

The Bliss is 7 1/4" long with a diameter of 1 3/8" and an insert able length of 5 3/4". It has four round nobs stacked on top of each other. The top nob is the smallest and most circular, the notch below that is a little bigger, and the two below that are a little bigger than the second one, but about the same size as each other.

The size of the toy is suitable for both beginners and more advanced users. Beginners may have trouble inserting the whole silicone portion of the toy with the combined length and girth, but it is capable of being more than satisfying without being inserted all the way.

The Bliss is pretty discreet for the amount of power it packs. It could be heard by someone sitting next to you, but probably not by someone across the room or on the other side of a door.

Last but not least the Bliss is waterproof, so you can bring her in the bath or shower with you. Unlike some toys which state that they are waterproof, but are only "water repellent" the bliss kept water out of the battery compartment after being submerged. Make sure you screw on the tap tightly or it will void the effects of the vibrators waterproof ability.

The Bliss is made out of silicone, so make sure you use only water based lubes. Using silicone lubes with silicone toys may have negative effects on the material of the toy. The Bliss can be boiled, washed with antibacterial soap and hot water, cleaned with toy cleaner, or thrown into the top rack of the dishwasher.

The packaging of the Bliss is impressive on it's own. The package is made out of hard plastic and composed of three pieces. The first piece of the package is the clear cover which is adorned with pictures of curling ivy, hearts and fleur-de-lis. The top of the cover is attached to a purple piece of ribbon with pink trim, and a metal fleur-de-lis which is connected to the end of the ribbon. The middle of the cover has a hot pink band with the words "Evolved love is back" on it in purple. The clear cover screws onto the base of the case which is made out of hard purple plastic. The base has a pink band in the middle of it with pink fleur-de-lis on it. The base states the name of the toy, the company, the website, etc. The third part of the case is the plastic ring which is placed between the two parts of the vibrator and allows the Bliss to be screwed onto the base. Some people might want to toss the plastic ring as it adds to the amount of time it takes to get the Bliss out of the packaging. Personally I like the ring and the lack of movement it brings to the case. The Bliss fits into the hole in the case without the ring, but is able to slightly move around inside.

The first Bliss I received in the mail started malfunctioning after only being turned on a couple of times, and eventually it wouldn't turn on anymore. Thanks to Eden's wonderful customer support system though, I was able to have a new Bliss in my hands within a few days!

Also, when the batteries begin to wear out the vibrations start to stop working beginning with the lowest setting. This may appear as if the toy is malfunctioning, but if you replace your batteries your Bliss should be as good as new and ready to go another round.

As I stated the material causes a little resistance when thrusting with the Bliss. If you think you might have an issue with this, or that you might like a smoother harder material than I would suggest trying the original Bliss which is made out of hard plastic.

Bliss
$35.99
This product was provided free of charge to the reviewer. This review is in compliance with the FTC guidelines.