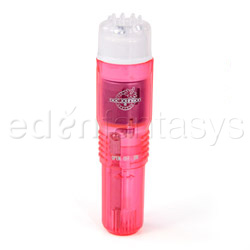 This toy is just NOT for me. I am NOT saying its a horrible toy that noone should use, just that it's not my cup of tea. It was not strong enough, and way too hard in texture for my delicate parts. For something that drains batteries like it does I'd hope it would send me FLYING through the roof!
Pros:
only takes one battery
Cons:
too hard, drains battery, gets hot too fast, dial too easy to turn during use
Rating by reviewer:
1
useful review
This toy didn't do anything for me, the vibrations were weak and drained the battery FAST. The material was very hard and uncomfortable to use. I used this toy maybe twice while I had it. I used it as a clitoral stimulant and also around my labia, but it was just plain uncomfortable. I tried to use it with a dildo so I could maybe get to sensations going, but it just didn't do the trick. The longer I used the the hotter it got, like literally it got HOT. Usually it doesn't take long to get my rocks off with a toy, that's the point of using a toy for and by myself, so I can get it over and be done, but this one needed time (and honestly I don't believe this toy ever did the trick!)

I was pretty dissatisfied with this toy. It is more for beginners I believe. The power on/off dial would change on its own during use also. It is quite hard to hold on to without turning the end where that dial is. I would venture to wonder if maybe I was using it wrong, but really how many ways can it be used!? I'm not new to toys OR my body and this one did nothing for me. I suppose it could make a nice nipple stimulant but that's not my thing so I'm not sure about that either.

This toy drained the battery (thank goodness it only needed one) fairly quickly. It wasn't strong enough for my taste, but it was fairly loud compared to its actual power. I also had trouble after putting the battery in with it falling apart! It would unscrew because I had a hard time putting it back together the correct way. This toy would be improved if it was SOFTER and STRONGER and the on/off/vibration speed was on the side as buttons and not on the end as a dial. This is one toy I will not be buying again or suggesting to friends.
Follow-up commentary   I still don't like it 3 months after original review
This toy is still on my “do not touch” list. It is not a good toy for me, but like any toy it could work for someone else!
This content is the opinion of the submitting contributor and is not endorsed by EdenFantasys.com