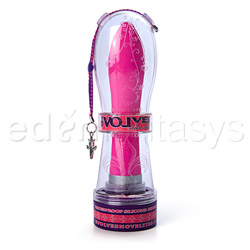 If you are new to toys and aren't put off by the slightly larger bulge circumference, this would be a great starter toy. Even for those of us who are more experienced with toys, this one has a lot of pros to offer. Strong steady vibrations are expelled via the g-spot bulging tip, as well as the rest of the shaft. Sometimes, ya just need a simple, easy vibrator to get the job done.
Pros:
Powerful
Flexible tip
Quiet
Silicone
Waterproof
Phthalate free
Cons:
Lint magnet
Battery cylinder
No separate off button
Rating by reviewer:
5
extremely useful review
I had never tried anything by Evolved before, so when the original Seduction vibrator was suggested as my free review toy this month, I was eager. Before I requested the Seduction, I stumbled across this silicone version and was thrilled to be one of the first few people to have the pleasure of trying this toy. I have never been big into vibrators but my eyes have been opened to new experiences since joining Eden Fantasys. The length of this toy makes it great for vaginal insertion and thrusting as well as clitoral stimulation. It doesn't have any kind of flared base so I don't recommend trying to shove this one in your butt, for fear of an embarrassing trip to the hospital. Knowing my luck, I'd end up getting some gorgeous spunk fondling my rear end ... and not in a good way. I'm thoroughly enjoying my new toy!

The Fleur De Lis Seduction by Evolved is made from pure food grade silicone and is produced in China. It is non-porous, heat-resistant, Hypo-allergenic, Phthalates and latex free. Silicone is the most hygienic of the pliable materials as there are no open pores to harbor any bacteria, earning itself a rating of 10 on Eden's site. Even with that said, I'd still recommend that you use a condom if you plan on sharing your toy as it never hurts to take extra care. Besides which, unless the person you share with is a life-partner, can you ever really trust that someone is totally clean from STD's or STI's? I particularly enjoy vibrators with a flexible tip, such as this one, as it adds more character to an otherwise plain straight toy. Unfortunately silicone lubricant will bond with silicone toys that it comes in contact with, so only water based lube should ever be used. The Seduction doesn't have quite as much drag on the skin like some silicone toys do, so I have never required lube with this vibrator.

The Seduction is operated by one clear button which is almost flush, on bottom of the base. Being in this location, it prevents the button from accidentally being pushed during play. Each time the button is pressed, the next vibration mode is presented (there are three in total), starting off on the lowest. There are no patterns. To turn the toy off, you must go through the modes which is kind of a pet hate for me living with others. But because this toy is so quiet, it's not that big of a deal in this case.

I am truly fond of my new vibrator and award it 5 out of 5 stars!
Follow-up commentary   I still like it 3 months after original review
I really wish there was a rating - Loving it even more. This one was my first very flexible traditional vibe and has left me wanting others that are bendable. The power of this one really surprised me. It looks so simple but Evolved KNOW how to super charge their toys.
I'm extremely impressed and have since bought more of their vibrations.
This product was provided free of charge to the reviewer. This review is in compliance with the FTC guidelines.