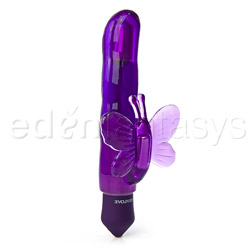 The packaging for the Flutter is beautiful just like all Evolved packaging is. This comes in a metal tin that includes a small plastic tray on the inside that holds up the vibrator nicely. This tin is perfect for giving as a gift, and it works great for storage as well. In the past, I've stepped on an Evolved tin on accident, and even under my body weight, it held up just fine and protected the toy, so I'm impressed by their tins. This one only comes with the sex toy and there are not instructions for operation. There is product registration information included though.

This rabbit vibrator is a vibrating rabbit. The shaft does not rotate. I was actually surprised to find that it did not rotate. It just vibrates. There is a motor inside the middle of the clitoral butterfly, and there is a motor in the tip of the shaft. When turned on, the butterfly's little antennae vibrate nicely, but the wings don't really move much. They could move more for you, but when I used them, they ended up pressed up against my body, so there wasn't much wiggle room for them to move. The antennae still vibrated a little bit, but the wings didn't vibrate as well as I was hoping for.

The first two settings aren't that loud. They are both loud enough to be heard in the same room, but they won't be heard through a closed door. However, the strongest setting (on high) is very buzzy, and it might be able to be heard through a closed door depending on how you use it. If you have it inserted, it's more muted, but when it's not inserted, it's a lot louder and buzzier. It isn't so buzzy when inserted, though, as your body hugs the vibrator's shaft.

I was a bit surprised by how buzzy the Evolved Flutter's vibrations are. I'm not really fond of buzzy vibrations, but this Flutter's vibrations are very buzzy. The vibrations are on the high side of moderate - but mostly on the highest setting. The low and medium settings are more on the lower side, but there is a large jump between the medium and high setting. The highest setting is also where it became the most buzzy. I found that I couldn't get orgasm with the vibrations of the Flutter. It worked as a tease, but the vibrations themselves were just too weak to be able to provide for a clitoral orgasm - especially through the jelly-like material.
Experience
As a rabbit, it's okay. The insertable portion requires a lot of lubricant in order to be able to insert it comfortably, and the material soaks up lubrication pretty quickly. The antennae vibrate pretty nicely, but the butterfly wings don't vibrate like I thought they would. The vibrations move through the jelly material okay, but the jelly material does soften the vibrations, so they don't end up as strong as I'd like them to be.

Cleaning the Flutter is extremely easy. TPR is the material it's made out of, and it's porous, so use a condom if you plan on sharing this as there's no way to fully sterilize it. It can be used with silicone based and water-based lubricant, and to clean it regularly, just use warm water and antibacterial soap. While I haven't tested it in-depth, the waterproof seal holds up just well to careless handling under water while washing it. It can be stored in the original packaging very easily.

Overall, I like the Evolved Flutter. It isn't perfect, and it isn't my favorite toy, but it's not a bad toy either. If you want a vibrating-shaft rabbit that has softer vibrations and is a flexible material, this could end up being your dream toy. If you have the right anatomy and shape, the wings of the butterfly could definitely flutter a bit on your sensitive spots, and it could be very pleasurable. I just wish it had worked better for me.
This content is the opinion of the submitting contributor and is not endorsed by EdenFantasys.com