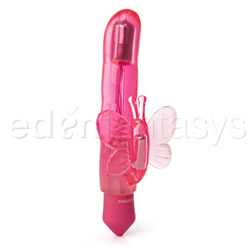 A slender, comfortable toy, the Flutter is a nice introduction to the world of dual-stimulator toys. The waterproof, phthalate-free construction makes it safe and easy to clean, while the non-phallic shape and gentler vibrations make it less intimidating to those new to vibrators. Complete with a pretty tin for gift-giving and storage, it makes a good beginning to a collection, or nice addition to the collection of a more sensitive woman.
Pros:
Waterproof, phthalate-free, two bullets, material is soft and comfortable, storage tin.
Cons:
Gentle vibrations, rather awkward button placement.
Rating by reviewer:
4
useful review

The Flutter is made of soft, forgivingly pliant medical grade TPR. Like jelly, it is soft, only moderately dense, and very bendable. It can in fact be easily bent to a 90 degree angle without any damage to the toy. Unlike jelly, it lacks any noticeable taste, and has only the faintest of chemical smells. Though the finish is shiny, not matte, the TPR has a great deal of drag when dry, so lubricant (either natural or from a bottle) is a must. Once lubed up, the material becomes very slick and smooth, gliding easily wherever it's needed.

The shaft of the flutter is simple and unintimidating. It is mostly straight, with three very subtle bulges going up the shaft and a slight point toward the g-spot. Though it looks like it might give some g-spot stimulation, there is almost none due to the very soft, pliable TPR: any pressure on the shaft simply makes it bend. This allows it to comfortably accommodate many body shapes without discomfort, but it sacrifices g-spot stimulation to do so.

The shaft, like many rabbit-style vibrators, has a girth that is not as beginner friendly as its design. At 1 1/4 inches in diameter, it is thicker than most beginner vibrators, and the little point at the tip makes it seem larger as it is inserted.

At 3 inches wide and 3 across, the butterfly is much larger than those found on other dual stimulators. It gently flutters across the entire upper vulva, with the antennae aimed at the clitoris. If they can be positioned right, the balls on the end of the antennae flutter against the clitoris from either side. Those who like to press the bullet directly against the clit will find this hard to do, as the antennae and wings get in the way.

The clitoral bullet is a small, gentle micro-bullet set in the body of the butterfly. The shaft bullet is a larger, stronger bullet in seated in the final bulge at the tip. Both are controlled by the same button, so while the power levels in the two bullets are very different, they increase in power together. There are three levels of power, starting at the gentlest and ending at the strongest.

The vibrations are controlled by a single push-button on the handle, where the very bottom comes to a point. The button is easy to press, but also often get pressed accidentally during thrusting. It also tends to turn itself on when leaned partially upright, as in a shower caddy.

On the Evolved Novelties website, the Flutter is described as having an ultra-powerful motor while still being whisper quiet. Both descriptions stretch the truth somewhat. The more powerful shaft bullet never gets past moderate vibration levels, and the butterfly bullet tops out at about as strong as an average phone set to vibrate. As for volume, even while inserted it can easily be heard through a pile of blankets from across the room, though not through a closed door. The noise of a shower is not enough to cover the noise, either. While is it quiet enough not to be heard through a bathroom door, it is clearly audible between dorm showers.

Because it is waterproof, the Flutter is very easy to clean. Soap and water can be used to wash it, or it can be cleaned with toy cleaners. TPR is a porous material that can't be sterilized, so no sharing without a condom. This toy is compatible with both water-based and silicone lubricants. It should be stored not touching other toys; the tin it comes in makes a great storage solution if you have the space for it, otherwise large zip-top bags also work well.

The Evolved Slenders Flutter comes in an attractive tin with a clear acrylic lid and mason jar-style clasps at either end. The toy itself sits in a molded plastic insert that leaves it attractively presented butterfly up. While the toy is described on the bottom of the tin, there are no instructions other than "Uses 2 AAA Batteries - Not Included" but none are really needed - all of the helpful instructions are in or on the toy itself. The entire tin is rather pretty, and can be used as a gift box when giving the Flutter to that special someone, and as a nice storage box. All of the packaging can be either recycled or reused for storage indefinitely, making this some of the more environmentally friendly packaging available.

Passion wave butterfly
$79.99
Follow-up commentary   I still don't like it 4 months after original review
I was never really much of a fan of this dual stimulator vibe. I like my vibrations strong, and flutter was all this one did. Since I got it, I've tried a bunch of different kinds of batteries to try to up the power, but nothing worked. It's still a nice vibrator if you don't need much external stimulation from a rabbit, or absolutely must have a very quiet toy. Those who need moderate to high vibrations to get off should steer clear.
This product was provided free of charge to the reviewer. This review is in compliance with the FTC guidelines.