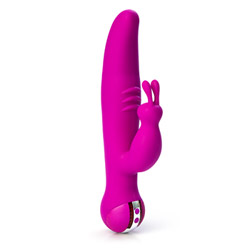 The Vr10 is made of silicone. That's right, y'all: a silicone rabbit. Be still my heart. The entire toy, except for the control panel is made of a very jelly-like silicone. I was actually a bit put-off when I first felt it because, up until now, I've only experienced far more rigid silicones; this truly has a likeness to jelly, without all of the pesky safety issues. It does have some drag to it, and it does pick up a bit of lint and dust, but nothing especially pesky.

Vr10 is a girthy, wide rabbit, that's accessible by most users with a bit of warmup. Measuring in at 9 1/2" long, with 6” of insertable length, it has a 1 3/4" diameter. The shaft of the toy is gently tapered, with the tip curved a bit for g-spot stimulation. Halfway down the shaft are three ribs which, honestly, I never feel during use. Bear in mind, I'm not a thruster, so if you are, I can see that you might find them to be the most annoying ridges ever created. For me, though, not yet a problem.

About an inch below the ridges is the clitoral arm's extension; that reaches up past the ridges, with the bunny's nose directly over the lowest ridge, and the bunny ears extending about a millimeter over the highest ridge. The bunny arm is very flexible. I can pull it out to about a 130 degree angle without worrying it's gonna pop off.

Once you move down past the clitoral arm, you get the handle of the toy, which is flared into a sphere. The control panel is here on the base, with two buttons to change speeds, and two rows of lights that increase with your intensity choices (it reminds me a bit of runway lighting). The control panel is made of plastic.

While I find it a bit girthy for my daily use, it's totally manageable because the tip is curved, and smaller, and the whole toy tapers up in girth so I can gradually get used to it. Because the bunny's ears extend so high, I think this would work really well for a lot of users; if you're not able to take the whole girth of the toy, the ears will stimulate you, and if you can take more, the bunny's nose will offer stimulation--and the bunny itself is very flexible.

For a bit of scale:

The Vr10 has two main features, the clitoral arm vibration, and the shaft rotation. The entire clitoral arm vibrates with nearly the same intensity, so no matter where you position it, you'll be receiving maximum pleasure. The only exception to this is the bunny ears; although they vibrate really well, when you press them against your body, the vibration is significantly lessened. The most powerful vibrations are felt near the bunny 'nose', since it's closest to the shaft of the toy, and is what's usually resting on my clitoris. These vibrations? They're powerful, no doubt about it. They're on the more buzzy side, but weren't buzzy enough to detract from my ability to enjoy, and they were definitely the strongest vibrations I've ever felt on a rabbit. They aren't anywhere near a Hitachi, and are less than the MiMi or Form Bunny, but I'd still rate them a five.

There is no vibrational portion in the shaft of the Vr10, but the top inch and a half of the toy rotates in small circles. It's not like the beaded rabbits, where there's internal rotation, but the top of the toy itself rotates. When paired with the clitoral stimulation, this feature is really quite lovely.

The clitoral arm and rotation each have seven (SEVEN.) different speeds/intensities that can be controlled using the two buttons on the base; just push and hold them down to increase the vibrations, push it once to turn them off. The only annoying thing is that to decrease the intensity, you have to actually stop the vibration/rotation, and then cycle through.

This toy also has a locking feature, to prevent this toy from turning on accidentally, which you can utilize by holding down both buttons until you see the lights flash all the way up and then go solid; to unlock it, just do the same thing.

This toy is waterproof, and it works very well in both the bathtub and shower; the vibrations stay strong through underwater use.

The Vr10 is made of silicone, which means it can be sanitized, for use with a partner. Unfortunately, because it's a mechanized toy, you should NOT boil or dishwash it. You can sterilize it with a 10% bleach solution, but routine maintenence is easy and doesn't require bleach! You can clean it with antibacterial soap and water or a toy cleaner. Because it's a lint magnet, don't forget to at least rinse it off before use. Silicone toys don't play well with silicone lubes, so be kind and use water-based lubricant, only. Similarly, you should store this toy away from other silicone toys, to prevent damage due from silicone not playing well with other silicones.

The Vr10 comes with a large black storage pouch, big enough to store the toy and its base quite easily.

This toy can be used with condoms for sharing or easy cleanup, but the condoms (I've found) tend to break when you take them off, due to those pesky ridges. Even so, they don't break during use and should be fine to remove if you're gentle with them, and roll them off, rather than yanking them off.

The Vr10 comes in a really awful looking box, but please remember that we don't judge our sex toys by their packaging. It's what's inside that counts, right?

The Vr10 is magenta pink, as it is pictured in the photo on EF. In most pictures and videos I take of it, it looks like a deeper purple. This is totally deceptive. It is magenta, not purple.

The Vr10 is rechargeable, and comes with a charging stand/base, which the Vr10 sits on to charge. No plugs, no fancy alignment, nothing about which you need to worry. It's really easy to use, and after a long lifetime of doing the Rechargeable Tango, I'm grateful this is so hassle-free. Although this one has to be charged up before its first use, it only takes a few hours, and it has FABULOUS battery life. I'm able to use it for three sessions, with no drop in intensity and no annoying shut-offs. Love it.
This product was provided at a discounted price in exchange for an unbiased review. This review is in compliance with the FTC guidelines.