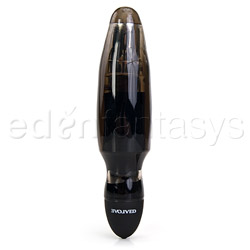 Being a vibrator, power is pretty important. This one does not disappoint, but it probably won’t knock your socks off either. The three levels of steady intensity and the off position are cycled through by a simple push button on the bottom of the vibe. The lowest power is gentle but easily felt, probably a 2 on the vroom scale. I’d say medium would be 3 vrooms and high would be 4 vrooms. The vibe strength should be enough for most people and it did manage to get even me (the power whore) off when used clitorally. The motor is fairly quiet and I’ve not noticed any rattling inside of the toy either. I give this 2 bees for quietness; which I feel is better than average for noise output.

If you like the feel of jelly toys than you will love the feel of the Diamante. The TPR is Phthalate-free, giving but not floppy, has a noticeable odor that is not as strong as a typical Jelly toy, and is tacky enough to still pick up every piece of lint in the room. It is safe to use water based or silicone based lubricants with TPR. A condom is still a good idea when sharing because this toy can not be sterilized. I would also suggest not using the Diamante anally because it lacks a flanged based to keep it from slipping inside.

The battery cap is rubber-cote, and when unscrewed reveals a clear rubber o-ring which makes this toy truly waterproof. A battery tube slides out while housing a second battery tube. The innermost tube fits two AA batteries snugly, then this slides back inside of the outer tube which goes back into the toy. I found this whole process simple, but a touch tedious. The cap screws on tightly, and everything seems to be good quality. I have tested this toy is water (submerged completely for several minutes) without any moisture making its way inside of the toy.

When it comes to cleaning, simple soap and water will work.
Experience
This is the second toy from Evolved that I have received (the first being the Rhapsody), and I believe they are fairly similar in quality. They are both a little smelly for TPR, and they both have the same intensity in the motors. The only thing I noticed was different is that the inner core and motor are packed more closely together in this toy, causing no annoying rattling. While it doesn’t make much difference, this does affect the noise level substantially.

I didn’t really care for the shape of this toy, as I didn’t find it very stimulating. I loved that it stretched me, but I was rather disappointed at how difficult this made it to maneuver. The tip didn’t even come close to my g-spot and the vibes are substantially weaker near the base than at the tip. The only stimulation I received from this toy while using it penetrativly was the slight stretching to my vaginal canal (more so near the opening). I wound up using this toy mostly for clitoral stimulation, and it did a good job at it.

While I did have fun with the toy, and I was able to reach climax using it externally, there are a few points you should be aware of. Firstly the girth is fairly generous at just under 2 inches in diameter. This is larger than average, and wouldn’t be a good starting place for someone new to penetration. The toy isn’t shaped for hitting the g-spot, so if that’s what you are looking for, I’d suggest taking a look at something with a curve to it instead.

Over all, I think this is a good vibe and I would recommend it because of the quality, even though it was not the best fit for me personally.
This product was provided free of charge to the reviewer. This review is in compliance with the FTC guidelines.